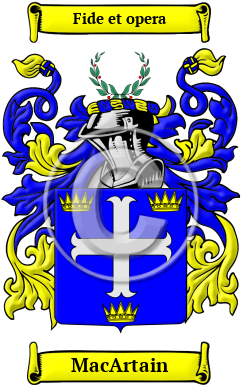 The root of the ancient Dalriadan-Scottish name MacArtain is the Celtic personal name Arthur. It denotes the 'son of arthur', which means noble one.

Early Origins of the MacArtain family

The surname MacArtain was first found in Argyllshire (Gaelic erra Ghaidheal), the region of western Scotland corresponding roughly with the ancient Kingdom of Dál Riata, in the Strathclyde region of Scotland, now part of the Council Area of Argyll and Bute, where they held a family seat from early times and their first records appeared on the census rolls taken by the ancient Kings of Scotland to determine the rate of taxation of their subjects.

Early History of the MacArtain family

This web page shows only a small excerpt of our MacArtain research. Another 184 words (13 lines of text) covering the years 1427, 1767, and 1817 are included under the topic Early MacArtain History in all our PDF Extended History products and printed products wherever possible.

Historical recordings of the name MacArtain include many spelling variations. They include They are the result of repeated translations of the name from Gaelic to English and inconsistencies in spelling rules. MacArthur, MacArtair, MacArter and many more.

Notable amongst the Clan from early times was Alister MacArthur who was beheaded by James I in 1427; and John MacArthur of the Strachur branch (1767) who journeyed to Australia with the 102nd Regiment. He became actively involved in the development...
Another 41 words (3 lines of text) are included under the topic Early MacArtain Notables in all our PDF Extended History products and printed products wherever possible.

Migration of the MacArtain family to Ireland

Some of the MacArtain family moved to Ireland, but this topic is not covered in this excerpt.
Another 60 words (4 lines of text) about their life in Ireland is included in all our PDF Extended History products and printed products wherever possible.

Migration of the MacArtain family

Descendents of Dalriadan-Scottish families still populate many communities across North America. They are particularly common in Canada, since many went north as United Empire Loyalists at the time of the American War of Independence. Much later, in the late 19th and early 20th centuries, the highland games and Clan societies that now dot North America sprang up, allowing many Scots to recover their lost national heritage. Some of the first immigrants to cross the Atlantic and come to North America bore the name MacArtain, or a variant listed above: Neil McArthur who settled in New York State in 1738 with his wife Mary Campbell and three children, Alexander, John, and Christian; Patrick McArthur also settled in New York State in 1738 with his wife Mary McDugall and children, Charles, Colin, and Jennet.