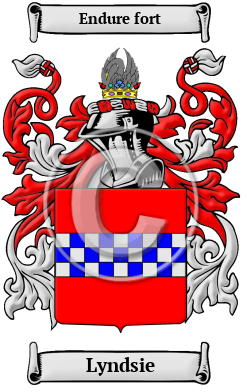 The Lyndsie family originally lived in the parish of Lindsay in the northern English county of Northumberland. Ealdric de Lindsay held estates in both Normandy and in Lincolnshire, England. He was a tenant of English estates for the Earl of Chester.

Early Origins of the Lyndsie family

The surname Lyndsie was first found in Lanarkshire (Gaelic: Siorrachd Lannraig) a former county in the central Strathclyde region of Scotland, now divided into the Council Areas of North Lanarkshire, South Lanarkshire, and the City of Glasgow where they were descended from Randolph Lord of Toeni who was banished by Duke William from Normandy in 1058 along with many other knights.

He settled on the borders of Lincolnshire and Leicestershire and erected a barony known as Linesi including Belvoir Castle. When the Duke of Normandy invaded England he was again forced to move and settled on the lands of Crawford in Lanarkshire Scotland.

"The first of the name in Scotland is Sir Walter de Lindeseya, who appears as one of the witnesses in the Inquisitio of Earl David concerning the possessions and rights of the see of Glasgow in 1124. His great-grandson, Sir William de Lindeseia, was one of the hostages for King William the Lion, 1174," [1]

"Lord Lindsay tells us the names Lindesay and Limesay are identical, both of them implying 'Isle of Lime-trees,' and are frequently interchanged, and applied to the same individuals in ancient public records and in the early transcripts of the Battle Abbey Roll." [2]

John Lindsay (d. 1335) was "Bishop of Glasgow, belonged to the family of the Lindsays of Lambertoun in Berwickshire, and was descended from Sir Walter de Lindsay (d. 1222), second son of William Lindsay of Crawford, judiciary of Scotland under William the Lion. He was the son of Walter Lindsay of Lambertoun, and his name first appears as witness to one of the charters, dated about 1275, and preserved in the chartulary of Paisley." [3]

Early History of the Lyndsie family

Spelling variations of this family name include: Lindsay, Lyndsay, Lyndsey, Lindesey, Lindsey and many more.

Migration of the Lyndsie family to Ireland

Some of the Lyndsie family moved to Ireland, but this topic is not covered in this excerpt.
Another 278 words (20 lines of text) about their life in Ireland is included in all our PDF Extended History products and printed products wherever possible.

Migration of the Lyndsie family