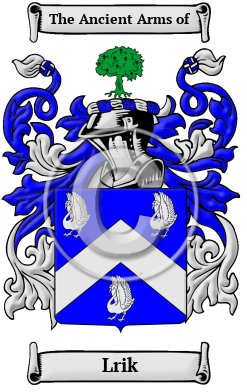 The ancient Anglo-Saxon surname Lrik came from Wulfric, a Germanic personal name that became common in England after the Norman Conquest. After King William the Conqueror defeated the Saxon nobility at the Battle of Hastings, he encouraged the immigration of skilled tradesmen and administrators from the continent into England. Many of these came from the area where Germany would later become a nation. This resulted in the importation of a large number of new personal names and surnames. The personal name Wulfric means "wolf-powerful." [1]

This name appears in the Domesday Book as Wlfric and Vlfric. [2] This name is a vernacular name, arising from the vernacular tradition of naming. According to this custom, names were originally composed of vocabulary elements from the local language. Vernacular names that were derived from ancient Germanic personal names have cognates in most European languages. For example, the court of Charlemagne (742-814) was Christian and Latin-speaking, but the Frankish dialect of Old German was commonly used for personal names. Vernacular names were widespread throughout Normandy. Accordingly, many typical English and French names are in fact, originally of Germanic origin and often have cognates in other European countries.

Early Origins of the Lrik family

The surname Lrik was first found in Shropshire. "This is a very ancient Shropshire family, descended from Sir Adam Wolryche, Knight, of Wenlock, living in the reign of Henry III., and who previously to his being knighted, was admitted to the Roll of Guild Merchants of the town of Shrewsbury in 1231, by the old Saxon name of Adam Wulfric." [3] [4]

However, the family was Lords of the manor of Leek, Aldithley, and Balterley in Staffordshire, and of Croxton and Etchells in the county of Cheshire, before and after the Norman Conquest in 1066.

"Garlinneck in [the parish of Creed, Cornwall] was for many years a seat of the Woolridges, by whom it was sold not long since to the Rev. George Moore." [5]

Early History of the Lrik family

The English language only became standardized in the last few centuries; therefore,spelling variations are common among early Anglo-Saxon names. As the form of the English language changed, even the spelling of literate people's names evolved. Lrik has been recorded under many different variations, including Woolrich, Woolridge, Wolrich, Woolrych, Wolridge, Wooldridge and many more.

Distinguished members of the family include Sir Thomas Wolrich or Wolryche (1598-1668), English Baronet and Royalist who "sprang from a Cheshire family which acquired the estate of Dudmaston in Shropshire in the twelfth century, and was thenceforth identified with that county. The deed of grant is said to be one of the oldest private deeds in England. It is reproduced in Eyton's 'Antiquities of Shropshire' (iii. 185). The pedigree is extant from 1279. Thomas was the third in descent from John Wolryche, who married 'the Fair Maid of Gatacre,' Mary, daughter of John Gatacre of that place, and was the son...
Another 143 words (10 lines of text) are included under the topic Early Lrik Notables in all our PDF Extended History products and printed products wherever possible.

Migration of the Lrik family

For many English families, the political and religious disarray that shrouded England made the far away New World an attractive prospect. On cramped disease-ridden ships, thousands migrated to those British colonies that would eventually become Canada and the United States. Those hardy settlers that survived the journey often went on to make important contributions to the emerging nations in which they landed. Analysis of immigration records indicates that some of the first North American immigrants bore the name Lrik or a variant listed above: John and Sarah Woolrich, who settled in Salem, Massachusetts in 1630; Joanne Woolrich, who arrived in Virginia in 1635; as did Timothy Woolrich in 1650.