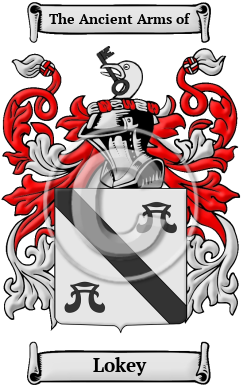 Early Origins of the Lokey family

"William Lokky was chaplain in Glasgow, 1503, and John Loky is recorded in Strafrank in 1531. David Lokky was "ane of the maris generall of the sheriffdome" of Forfar in 1535, Quhintene Loke was burgess of Edinburgh in 1583 and John Lockie was retoured heir in the three mark lands of Martoune in the bailliary of Lauderdaill in 1670." [1]

Early History of the Lokey family

Spelling variations of this family name include: Lockie, Lockey, Locky and others.

Notable amongst the family at this time was Rowland Lockey (c. 1565-1616), an English Baroque era painter and goldsmith, best known for his near life-size painting "Family of Sir Thomas More" (1527). As the son of Leonard Lockey, a crossbow maker of the parish of St Bride's, Fleet Street, London, Lockey was apprenticed to Queen Elizabeth's miniaturist and goldsmith Nicholas Hilliard for eight years and was made a...
Another 68 words (5 lines of text) are included under the topic Early Lokey Notables in all our PDF Extended History products and printed products wherever possible.

In the United States, the name Lokey is the 12,793rd most popular surname with an estimated 2,487 people with that name. [2]

Lokey migration to the United States +

Lokey Settlers in United States in the 19th Century

Lokey Settlers in United States in the 20th Century