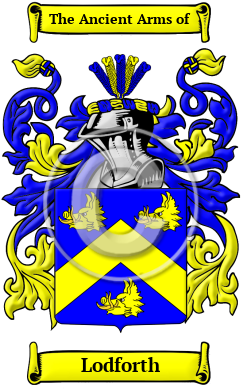 Early Origins of the Lodforth family

The surname Lodforth was first found in Shropshire at Ludford, a parish, in the parliamentary borough and poor-law union of Ludlow, partly in the hundred of Wolphy. Until 1895, this parish was in Herefordshire. The parish dates back to the Domesday Book of 1086 when it was first listed as Ludeford. [1]

Literally the place name means "ford near a rapid," from the Old English words "hlude" + "ford." [2] There was another village and civil parish named Ludford (Ludford Parva and Ludford Magna) in Lincolnshire but this parish was in part deserted due to the Black Death. RAF Ludford Magna was a former Royal Air Force airfield situated south of the village which was opened in 1943.

Lyford is closely related to the name but we must look to Devon to find its origins. This parish, in the union of Tavistock, hundred of Lifton dates back to Saxon times when it was first listed as Hlydanforda c. 1000. By the time of the Domesday Book of 1086, it was known as Lideforda and literally meant "ford over the River Lyd," from the Old English river-name + "ford." [2]

"Although Lydford finds no place in history until Anglo-Saxon times, it then appears as a town that had some antiquity to boast. Its importance is shown by the fact that it was the seat of a Saxon mint, sharing that honour in Devon with Exeter and Totnes. Prior to 1066, therefore, it is evident that Lydford must have been the most populous centre in Devon, Exeter alone excepted. History is silent as to the cause of this devastation of Lydford, but there seems every reason to believe that it was connected in some way with the Conquest, and that it probably arose from the resistance which the sturdy little borough offered to the Norman arms." [3]

"Many have been the attempts to account for the origin of 'Lydford law.' Local tradition avers that it originated in the cruelty of Jeffries during the Bloody Assize, and that his ghost haunts the castle in the shape of a black pig. But the Bloody Assize stopped short of Lydford, and the saying is far older than the days of Monmouth. " [3]

"In 1238, the Forest of Dartmoor, and the castle of Lydford, were bestowed by the king upon Richard, Earl of Cornwall; and the manor now belongs to the duchy. In the reign of Edward I. the place twice sent members to parliament; in 1267, a weekly market was granted, with an annual fair for three days." [4]

Today Lydford Castle is owned by the National Trust and is open to the public. East and West Lydford are located in Somerset and both have retained a rather small population over the years. Both were listed as Lideford in the Domesday Book. John Lodeford was the first record of the surname during the reign of Edward III in Somerset. Following that early record, John Lydford, or Ledford, or Ludford was listed on a marriage license in 1450. William Askeryck and Elizabeth Ludford were listed on a marriage license in 1548. [5]

Early History of the Lodforth family

Another 39 words (3 lines of text) are included under the topic Early Lodforth Notables in all our PDF Extended History products and printed products wherever possible.

Migration of the Lodforth family