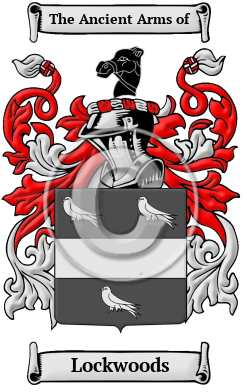 The ancient history of the Lockwoods name begins with the ancient Anglo-Saxon tribes of Britain. The name is derived from when the family resided in the place called Lockwood that was in the West Riding of Yorkshire. The surname Lockwoods is a habitation name that was originally derived from the Old English words loca and wudu, meaning enclosure and wood. [1] Therefore the original bearers of the surname lived in or near a forest in Yorkshire.

Early Origins of the Lockwoods family

The surname Lockwoods was first found in West Yorkshire at Lockwood, a chapelry, in the parish of Almondbury. The village is a rural suburb to the town of Huddersfield and is located in the vale of the river Holme. [2]

However, this claim is rather dubious and should be questioned as the Yorkshire Poll Tax Rolls of 1379 list Willelmus de Lokewod and Thomas de Lockewod holding lands at that time. [3] Lockwood is also a civil parish in the unitary authority of Redcar & Cleveland in North Yorkshire.

"The Lockwoods were well established in Ecclesfield parish [of South Yorkshire] during the reign of Elizabeth. Lincolnshire is another home of the name. Lockwood is a parish near Huddersfield [West Yorkshire]."

Early feudal rolls provided the king of the time a method of cataloguing holdings for taxation, but today they provide a glimpse into the wide surname spellings in use at that time. Henry de Locwode was listed in the Assize Rolls for Staffordshire in 1294. Later, Adam de Lokwode was found in the Feet of Fines for Yorkshire in 1352 and Richard Lokwood was in the the rolls for Kent in 1455. [4]

There is a scant entry for the family in Scotland, that of "John Locwode, witness in Edinburgh, 1426." [5]

Early History of the Lockwoods family

This web page shows only a small excerpt of our Lockwoods research. Another 90 words (6 lines of text) are included under the topic Early Lockwoods History in all our PDF Extended History products and printed products wherever possible.

Until quite recently, the English language has lacked a definite system of spelling rules. Consequently, Anglo-Saxon surnames are characterized by a multitude of spelling variations. Changes in Anglo-Saxon names were influenced by the evolution of the English language, as it incorporated elements of French, Latin, and other languages. Although Medieval scribes and church officials recorded names as they sounded, so it is common to find one person referred to by several different spellings of his surname, even the most literate people varied the spelling of their own names. Variations of the name Lockwoods include Lockwood, Lockward and others.

More information is included under the topic Early Lockwoods Notables in all our PDF Extended History products and printed products wherever possible.

Migration of the Lockwoods family

Searching for a better life, many English families migrated to British colonies. Unfortunately, the majority of them traveled under extremely harsh conditions: overcrowding on the ships caused the majority of the immigrants to arrive diseased, famished, and destitute from the long journey across the ocean. For those families that arrived safely, modest prosperity was attainable, and many went on to make invaluable contributions to the development of the cultures of the new colonies. Research into the origins of individual families in North America revealed records of the immigration of a number of people bearing the name Lockwoods or a variant listed above: Edmund Lockwood and his wife Elizabeth and child settled in Salem Massachusetts in 1630; Albert and Charles Lockwood arrived in Philadelphia in 1874; James and William Lockwood arrived in San Francisco in 1850..