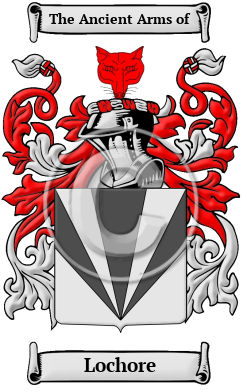 Early Origins of the Lochore family

The surname Lochore was first found in Fife, where they have held a family seat from the 12th century, probably about 1135. About this time Earl David of Huntingdon, son of King Malcolm of Scotland, came north to claim the throne of Scotland. He brought with him many Norman nobles to whom he gave estates.

The ancient Gaelic family seated on Lochore (Inchgall) Island in the Parish of Ballingry was superceded by these new Lords from Normandy. He was succeeded by another Constantinus, either a son or grandson in 1235. Andreas, brother of Constantin, and Phillip and David, brothers of Constantinus, also started other lines of the family. David, became Sheriff of Fife in 1265. David was close to Royal Court circles and was one of the dignitaries on a charter by King Alexander III at Roxburgh in 1279.

Early History of the Lochore family

More information is included under the topic Early Lochore Notables in all our PDF Extended History products and printed products wherever possible.

Migration of the Lochore family

Some of the first settlers of this family name or some of its variants were: John Locher who landed in Philadelphia, Pennsylvania in 1856; followed by William Locher in 1858.