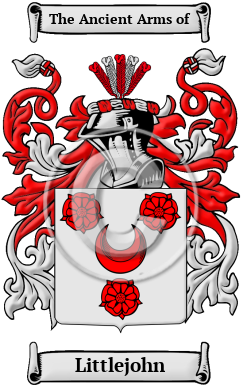 The ancestors of the first families to use the name Littlejohn lived in ancient Scotland in the kingdom of Dalriada. The name was then used as a nickname for a person who is the younger of two people bearing the name John. It was also used as an ironic nickname for a person who was of large stature, regardless of his personal name. Littlejohn is a nickname surname, which belongs to the category of hereditary surnames. Nicknames form a broad and miscellaneous class of surnames, and can refer directly or indirectly to one's personality, physical attributes, mannerisms, or even their habits of dress.

Early Origins of the Littlejohn family

The surname Littlejohn was first found in Dumbartonshire, where they held a family seat from early times and their first records appeared on the early census rolls taken by the early Kings of Britain to determine the rate of taxation of their subjects.

Early History of the Littlejohn family

This web page shows only a small excerpt of our Littlejohn research. Another 97 words (7 lines of text) are included under the topic Early Littlejohn History in all our PDF Extended History products and printed products wherever possible.

In various documents Littlejohn has been spelled Since medieval scribes still spelled according to sound, records from that era contain an enormous number of spelling variations. Littlejohn, Lytteljohn, Lyttlejohn and others.

More information is included under the topic Early Littlejohn Notables in all our PDF Extended History products and printed products wherever possible.

In the United States, the name Littlejohn is the 2,235th most popular surname with an estimated 14,922 people with that name. [1]

Littlejohn migration to the United States +

Many who arrived from Scotland settled along the east coast of North America in communities that would go on to become the backbones of the young nations of the United States and Canada. In the American War of Independence, many settlers who remained loyal to England went north to Canada as United Empire Loyalists. Their descendants later began to recover the lost Scottish heritage through events such as the highland games that dot North America in the summer months. Research into various historical records revealed some of first members of the Littlejohn family emigrate to North America:

Littlejohn Settlers in United States in the 17th Century

Littlejohn Settlers in United States in the 18th Century

Littlejohn Settlers in United States in the 19th Century

Littlejohn Settlers in Canada in the 18th Century

Littlejohn Settlers in Australia in the 19th Century

Littlejohn Settlers in New Zealand in the 19th Century

Historic Events for the Littlejohn family +