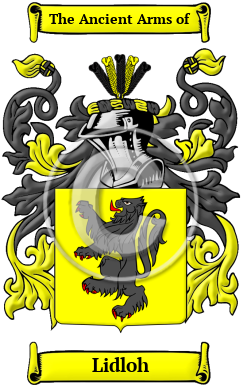 The present generation of the Lidloh family is only the most recent to bear a name that dates back to the ancient Anglo-Saxon culture of Britain. Their name comes from having lived on a hill beside a babbling river which was later referred to as Ludlow Lidloh is a topographic surname, which was given to a person who resided near a physical feature such as a hill, stream, church, or type of tree. Habitation names form the other broad category of surnames that were derived from place-names. They were derived from pre-existing names for towns, villages, parishes, or farmsteads. Other local names are derived from the names of houses, manors, estates, regions, and entire counties.

Early Origins of the Lidloh family

The surname Lidloh was first found in Shropshire at Ludlow, a market town close to the Welsh border and in the Welsh Marches. The first listing of the place name dates back to 1138 where it was listed as Ludelaue and literally meant "hill or tumulus by a rapid," derived from the Old English words hlude + hlaw. [1] Ludlow was called by the Britons Dinam, or "the palace of princes," and by the Saxons Leadlowe, and Ludlowe. One reference claims Robert de Montgomery, kinsman of the Conqueror, fortified the town with walls, and erected most of its stately castle in which he lived until his death in 1094. Yet another reference claims the castle was built by Walter de Lacy in the late 11th century as possession of Ludlow Castle descended through the Lacy family until 1115. Mother Ludlam's Cave or Mother Ludlum's Hole is a small cave in the sandstone cliff of the Wey Valley at Moor Park, near Farnham, Surrey. The earliest record of the place occurs when a monk named Symon found a spring rising in the cave in the 13th century. Mother Ludlam was claimed to be a white witch who lived in the cave. Her cauldron has been kept in Frensham Church nearby for centuries.

Early History of the Lidloh family

Until the dictionary, an invention of only the last few hundred years, the English language lacked any comprehensive system of spelling rules. Consequently, spelling variations in names are frequently found in early Anglo-Saxon and later Anglo-Norman documents. One person's name was often spelled several different ways over a lifetime. The recorded variations of Lidloh include Ludlow, Ludley, Ludloe and others.

Notables of this surname at this time include: Roger Ludlow (1590-1664), an English lawyer, magistrate, military officer, and colonist who helped found the Colony of Connecticut, he directed Boston's first fortification, Castle William in 1634; Edmund Ludlow (Ludlowe) (c. 1617-1692), an English parliamentarian, best known for his involvement...
Another 47 words (3 lines of text) are included under the topic Early Lidloh Notables in all our PDF Extended History products and printed products wherever possible.

Migration of the Lidloh family to Ireland

Some of the Lidloh family moved to Ireland, but this topic is not covered in this excerpt.
Another 33 words (2 lines of text) about their life in Ireland is included in all our PDF Extended History products and printed products wherever possible.

Migration of the Lidloh family

Thousands of English families boarded ships sailing to the New World in the hope of escaping the unrest found in England at this time. Although the search for opportunity and freedom from persecution abroad took the lives of many because of the cramped conditions and unsanitary nature of the vessels, the opportunity perceived in the growing colonies of North America beckoned. Many of the settlers who survived the journey went on to make important contributions to the transplanted cultures of their adopted countries. The Lidloh were among these contributors, for they have been located in early North American records: Roger and Sara Ludlow settled in Nantasket in 1630 with their six children; Edward Ludlow arrived in New York with his wife and five children in 1823..