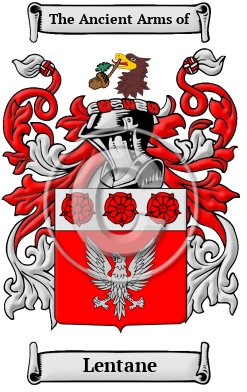 Early Origins of the Lentane family

The surname Lentane was first found in Linton, now West Linton, a village in the Scottish Borders, (formerly in Peeblesshire) not far from East Linton; Linton, a parish of Roxburghshire; or at East Linton, a small burgh in the parish of Prestonkirk, East Lothian. [1]

Early History of the Lentane family

Notable amongst the family at this time was Bishop Sydney Linton (1841-1894), the first Bishop of the Diocese of Riverina, Australia. He was consecrated on 1 May 1884 at St Paul's Cathedral, London, and on...
Another 35 words (2 lines of text) are included under the topic Early Lentane Notables in all our PDF Extended History products and printed products wherever possible.

Migration of the Lentane family to Ireland

Some of the Lentane family moved to Ireland, but this topic is not covered in this excerpt.
Another 57 words (4 lines of text) about their life in Ireland is included in all our PDF Extended History products and printed products wherever possible.

Migration of the Lentane family