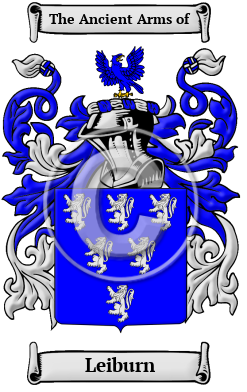 The ancestors of the bearers of the Leiburn family name are thought have lived in ancient Anglo-Saxon England. They were first found in the village of Leybourne. Leiburn is a habitation name from the broad category of surnames that were derived from place-names. They were derived from pre-existing names for towns, villages, parishes, or farmsteads. Other local names are derived from the names of houses, manors, estates, regions, and entire counties.

Early Origins of the Leiburn family

The surname Leiburn was first found in Kent at Leybourne, a parish, in the union of Malling, hundred of Larkfield, lathe of Aylesford. "There are considerable remains of a castle, consisting of a gateway flanked by circular towers, various arches, walls, &c., and traces of the moat by which it was surrounded; part of the ruin has long been converted into a dwelling-house." [1] A later branch of the family was found at Ashton with Stodday in Lancashire. "Ashton Hall, once the seat of the knightly family of Leyburne, and now the property of the Duke of Hamilton, is a quadrangular edifice, with a projecting wing to the east, and a square tower with angular turrets on the west; it was probably erected in the fourteenth century." [1]

Early History of the Leiburn family

Until quite recently, the English language has lacked a definite system of spelling rules. Consequently, Anglo-Saxon surnames are characterized by a multitude of spelling variations. Changes in Anglo-Saxon names were influenced by the evolution of the English language, as it incorporated elements of French, Latin, and other languages. Although Medieval scribes and church officials recorded names as they sounded, so it is common to find one person referred to by several different spellings of his surname, even the most literate people varied the spelling of their own names. Variations of the name Leiburn include Labern, Labourne, Laborn, Labron, Laburn, Layburn, Layborn, Layborne, Laybourn, Laybourne, Leiburn, Leybourne, Leyborne, Leyburn, Leyburne and many more.

Distinguished members of the family include Sir Roger de Leiburn, summoned to the English Parliament in 1299; George Leyburn (1593-1677), an English Catholic priest, President of the English College; John Leyburn (1615-1702), an English Roman...
Another 34 words (2 lines of text) are included under the topic Early Leiburn Notables in all our PDF Extended History products and printed products wherever possible.

Migration of the Leiburn family to Ireland

Some of the Leiburn family moved to Ireland, but this topic is not covered in this excerpt.
Another 39 words (3 lines of text) about their life in Ireland is included in all our PDF Extended History products and printed products wherever possible.

Migration of the Leiburn family

Searching for a better life, many English families migrated to British colonies. Unfortunately, the majority of them traveled under extremely harsh conditions: overcrowding on the ships caused the majority of the immigrants to arrive diseased, famished, and destitute from the long journey across the ocean. For those families that arrived safely, modest prosperity was attainable, and many went on to make invaluable contributions to the development of the cultures of the new colonies. Research into the origins of individual families in North America revealed records of the immigration of a number of people bearing the name Leiburn or a variant listed above: T. Labourne, who sailed to Baltimore in 1820; Eugene Laborne, who arrived in San Francisco in 1872; George Labourne, who was on record in Halton County, Ontario, in 1877.