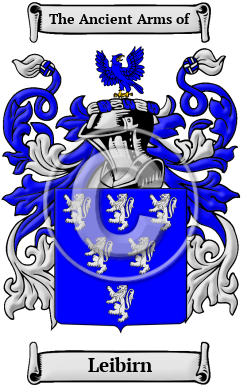 The name Leibirn first arose amongst the Anglo-Saxon tribes of Britain. It is derived from their having lived in the village of Leybourne. Leibirn is a habitation name from the broad category of surnames that were derived from place-names. They were derived from pre-existing names for towns, villages, parishes, or farmsteads. Other local names are derived from the names of houses, manors, estates, regions, and entire counties.

Early Origins of the Leibirn family

The surname Leibirn was first found in Kent at Leybourne, a parish, in the union of Malling, hundred of Larkfield, lathe of Aylesford. "There are considerable remains of a castle, consisting of a gateway flanked by circular towers, various arches, walls, &c., and traces of the moat by which it was surrounded; part of the ruin has long been converted into a dwelling-house." [1] A later branch of the family was found at Ashton with Stodday in Lancashire. "Ashton Hall, once the seat of the knightly family of Leyburne, and now the property of the Duke of Hamilton, is a quadrangular edifice, with a projecting wing to the east, and a square tower with angular turrets on the west; it was probably erected in the fourteenth century." [1]

Early History of the Leibirn family

One relatively recent invention that did much to standardize English spelling was the printing press. However, before its invention even the most literate people recorded their names according to sound rather than spelling. The spelling variations under which the name Leibirn has appeared include Labern, Labourne, Laborn, Labron, Laburn, Layburn, Layborn, Layborne, Laybourn, Laybourne, Leiburn, Leybourne, Leyborne, Leyburn, Leyburne and many more.

Distinguished members of the family include Sir Roger de Leiburn, summoned to the English Parliament in 1299; George Leyburn (1593-1677), an English Catholic priest, President of the English College; John Leyburn (1615-1702), an English Roman...
Another 34 words (2 lines of text) are included under the topic Early Leibirn Notables in all our PDF Extended History products and printed products wherever possible.

Migration of the Leibirn family to Ireland

Some of the Leibirn family moved to Ireland, but this topic is not covered in this excerpt.
Another 39 words (3 lines of text) about their life in Ireland is included in all our PDF Extended History products and printed products wherever possible.

Migration of the Leibirn family

At this time, the shores of the New World beckoned many English families that felt that the social climate in England was oppressive and lacked opportunity for change. Thousands left England at great expense in ships that were overcrowded and full of disease. A great portion of these settlers never survived the journey and even a greater number arrived sick, starving, and without a penny. The survivors, however, were often greeted with greater opportunity than they could have experienced back home. These English settlers made significant contributions to those colonies that would eventually become the United States and Canada. An examination of early immigration records and passenger ship lists revealed that people bearing the name Leibirn arrived in North America very early: T. Labourne, who sailed to Baltimore in 1820; Eugene Laborne, who arrived in San Francisco in 1872; George Labourne, who was on record in Halton County, Ontario, in 1877.