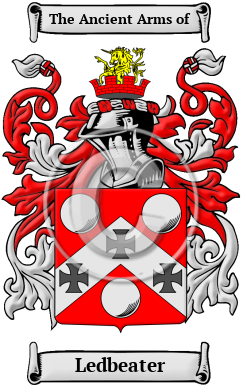 The name Ledbeater is from the ancient Anglo-Saxon tribes of Britain. The name was given to a person who was a worker in lead. Further research showed the name was derived from the Old English words lead and beatere, meaning literally "he who beats lead." Metallurgy was not an advanced art in the Middle Ages; the metal in modern cutlery is far harder and has more resiliency than that in the best sword in medieval times. It was a common sight during a battle in the early Middle Ages to see a soldier hit someone with a sword, then put it on the ground and step on it to straighten out the bend it had just acquired. Lead was a popular metal to work with thanks to its malleability, making it easy to work. Of course, its toxic properties were not known; in fact, its sweet taste led to its use in antiquity as a condiment in some places, though usually not for long. Lead was commonly found in jewelry as a metal mixed with gold, and in pewter, an amalgam of lead and tin, used for drinking cups and cutlery. This made the occupation of leadbeater an important one in the Middle Ages.

Early Origins of the Ledbeater family

The surname Ledbeater was first found in Durham where they held a family seat from very ancient times, some say well before the Norman Conquest and the arrival of Duke William at Hastings in 1066 A.D.

Early History of the Ledbeater family

This web page shows only a small excerpt of our Ledbeater research. Another 121 words (9 lines of text) covering the years 1221, 1250 and 1328 are included under the topic Early Ledbeater History in all our PDF Extended History products and printed products wherever possible.

Sound was what guided spelling in the essentially pre-literate Middle Ages, so one person's name was often recorded under several variations during a single lifetime. Also, before the advent of the printing press and the first dictionaries, the English language was not standardized. Therefore, spelling variations were common, even among the names of the most literate people. Known variations of the Ledbeater family name include Leadbetter, Leadbater, Leadbeater, Leadbeter, Leadbetter, Leadbitter and many more.

More information is included under the topic Early Ledbeater Notables in all our PDF Extended History products and printed products wherever possible.

Migration of the Ledbeater family

For political, religious, and economic reasons, thousands of English families boarded ships for Ireland, the Canadas, the America colonies, and many of smaller tropical colonies in the hope of finding better lives abroad. Although the passage on the cramped, dank ships caused many to arrive in the New World diseased and starving, those families that survived the trip often went on to make valuable contributions to those new societies to which they arrived. Investigation of the origins of family names on the North American continent has revealed that early immigrants bearing the name Ledbeater or a variant listed above: Albert Leadbeater settled in Philadelphia in 1848; Ann Leadbeater settled in Annapolis in 1725; John Leadbeter arrived in Philadelphia in 1811; T. and R. Leadbater arrived in New York in 1822..