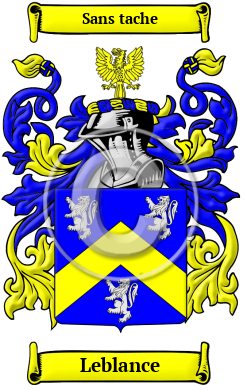 The surname Leblance is derived from the French word "blanc", which translates to "white". It was no doubt originally given to a man with white or blond hair and the feminine form, blanche, was usually given to a woman that possessed great beauty. [1]

Early Origins of the Leblance family

The surname Leblance was first found in Normandy (French: Normandie), the former Duchy of Normandy, where this ancient family were part of the Royal House of Blois and held a family seat with lands, titles, estates and manors. Members of this family were the hereditary Barons of Bailleul of Norman Conquest fame, and who assisted Duke William of Normandy, head of the House of Blois, in his conquest of England in 1066.

Early History of the Leblance family

This web page shows only a small excerpt of our Leblance research. Another 128 words (9 lines of text) are included under the topic Early Leblance History in all our PDF Extended History products and printed products wherever possible.

French surnames were subject to numerous spelling alterations depending on the region and time it was used. The early development of the French language relied heavily on borrowing elements and grammar from other languages. For example, Old French was infused with Germanic words and sounds when barbarian tribes invaded and settled in France after the fall of the Roman Empire. Middle French also borrowed heavily from the Italian language during the Renaissance. As a result of these linguistic and cultural influences, the name Leblance is distinguished by a number of regional variations. The many spelling variations of the name include Leblanc, Lebland, Leblang, Le Blanc, Blanc, Blanche, Blanchet, Blancheteau, Blancheton, Blanchonnet, Blanchot, Blanchaud, Blanquet, Blancot, Bianchi, Blanchecappe, Blanchecotte, Le Blank, Blank, Blanque, Blanke, Blancke and many more.

Another 41 words (3 lines of text) are included under the topic Early Leblance Notables in all our PDF Extended History products and printed products wherever possible.

Migration of the Leblance family

Approximately 110 years after the first landings by Cartier, there were only about 300 people in Quebec. France gave land incentives for 2,000 migrants during the next decade. Early marriage was desperately encouraged amongst the immigrants. The fur trade attracted migrants, both noble and commoner. 15,000 explorers left Montreal in the late 17th and 18th centuries. By 1675, there were 7000 French in Quebec. Migration to New France (Quebec) continued from France until it fell in 1759. In the year 1675 the Acadian presence in Nova Scotia, New Brunswick and Prince Edward Island had reached 500. In 1755, 10,000 French Acadians refused to take an oath of allegiance to England and were deported to Louisiana. The French founded Lower Canada, thus becoming one of the two great founding nations of Canada. The distinguished family name Leblance has made significant contributions to the culture, arts, sciences and religion of France and New France. Amongst the settlers in North America with this distinguished name Leblance were Anne, Catherine, Elizabeth, Desiré LeBlanc with his wife Marie, Jacques LeBlanc and with his wife Joseth, Simon LeBlanc with his wife Marie Joseph, and Jerome LeBlanc, who all settled in Oxford county in Quebec in 1763.