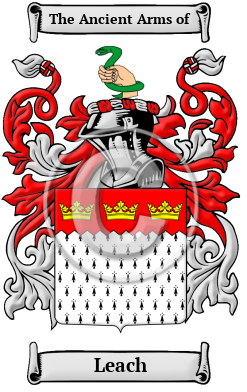 The name Leach is rooted in the ancient Anglo-Saxon culture. It is a name for someone who worked as a doctor. Throughout the Middle Ages, doctors were known as "leaches" as the practice of bleeding sick people was the generally accepted manner of curing them. There are countless people in the Middle Ages who died thanks to the common cold; not because the virus killed them, but because they bled to death on the advice of their physicians. Bleeding was accomplished by placing a dozen or so leaches on the person who was ill so that they could remove the poisons that were making them ill, hence the name "leach" for the occupation of doctor. It is small wonder that illness was so feared in the medieval period; many people died from illnesses that would not have otherwise killed them because their doctors were weakening them through loss of blood.

Early Origins of the Leach family

The surname Leach was first found in Oxfordshire where the earliest records of the family were found as Edmund le Leche and William le Leche who were both listed in the Hundredorum Rolls of 1273. A few years later, Robert le Leche was listed in the Writs of Parliament of 1307. [1]

Further north in Scotland, many records were found including: Henry Leche held a tenement in Glasgow in 1325. "Henry Leche, is later referred to in a safe conduct by Edward III of England in 1348 as "Hector medicus David de Bruys." From another reference to him in 1369, he turns out to be a MacBeth, perhaps one of the family of hereditary doctors of that name so famous in West Highland history. Wilham de Lech or Leche was burgess of Aberdeen, 1362. He may be William Leche, merchant of Aberdeen, whose goods were plundered in England, 1370, when his ship was driven ashore in Kirklee Rode, Suffolk." [2] They also settled in Monteith where they gave their name to Leitchtown.

Early History of the Leach family

It is only in the last few hundred years that the English language has been standardized. For that reason, early Anglo-Saxon surnames like Leach are characterized by many spelling variations. As the English language changed and incorporated elements of other European languages, even literate people changed the spelling of their names. The variations of the name Leach include: Leach, Leech, Leche, Leitch, Leich, Leetch and others.

More information is included under the topic Early Leach Notables in all our PDF Extended History products and printed products wherever possible.

Migration of the Leach family to Ireland

Some of the Leach family moved to Ireland, but this topic is not covered in this excerpt.
Another 50 words (4 lines of text) about their life in Ireland is included in all our PDF Extended History products and printed products wherever possible.

Leach migration to the United States +

Many English families tired of political and religious strife left Britain for the new colonies in North America. Although the trip itself offered no relief - conditions on the ships were extremely cramped, and many travelers arrived diseased, starving, and destitute - these immigrants believed the opportunities that awaited them were worth the risks. Once in the colonies, many of the families did indeed prosper and, in turn, made significant contributions to the culture and economies of the growing colonies. An inquiry into the early roots of North American families has revealed a number of immigrants bearing the name Leach or a variant listed above:

Leach Settlers in United States in the 17th Century

Leach Settlers in United States in the 18th Century

Leach Settlers in United States in the 19th Century

Leach Settlers in United States in the 20th Century

Leach Settlers in Canada in the 18th Century

Leach Settlers in Canada in the 19th Century

Leach Settlers in Australia in the 19th Century

Leach Settlers in New Zealand in the 19th Century

Leach Settlers in West Indies in the 17th Century

Historic Events for the Leach family +

Suggested Readings for the name Leach +