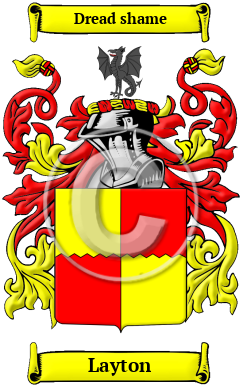 The name Layton is an old Anglo-Saxon name. It comes from when a family lived in the place called Leighton which had various locations in England including Huntingdon, Salop (Shropshire), Bedford, North Riding of Yorkshire and Cheshire. This Habitation name was originally derived from the Old English word Leac-tun, which referred to the homestead where leeks were grown.

Early Origins of the Layton family

The surname Layton was first found in Shropshire, where "the Leightons are stated to have been seated at Leighton in this county prior to the Conquest: Domesday has 'Rainald (vicecom') ten' Lestone; Leuui tenuit temp. Reg. Edw.' Hence there can be no doubt the name Lestone, i.e. Lewi's-town, now Leighton was derived. " [2]

Early History of the Layton family

Before the last few hundred years, the English language had no fast system of spelling rules. For that reason, spelling variations are commonly found in early Anglo-Saxon surnames. Over the years, many variations of the name Layton were recorded, including Leighton, Layton, Laton and others.

Notables of this surname at this time include: Sir Brian Leighton; Sir Edward Leighton (by 1525-1593), an English politician, High Sheriff of Montgomeryshire for 1549 and 1591; Sir Thomas Leighton (c.1530-1610), an English soldier and politician who served as the Governor of Guernsey and Jersey from 1570 to 1609; Sir William Leighton (c. 1565-1622), an Elizabethan composer and editor who published The Teares and Lamentatacions of a...
Another 66 words (5 lines of text) are included under the topic Early Layton Notables in all our PDF Extended History products and printed products wherever possible.

In the United States, the name Layton is the 2,175th most popular surname with an estimated 14,922 people with that name. [5]

Migration of the Layton family to Ireland

Some of the Layton family moved to Ireland, but this topic is not covered in this excerpt.
Another 30 words (2 lines of text) about their life in Ireland is included in all our PDF Extended History products and printed products wherever possible.

Layton migration to the United States +

To escape oppression and starvation at that time, many English families left for the "open frontiers" of the New World with all its perceived opportunities. In droves people migrated to the many British colonies, those in North America in particular, paying high rates for passages in cramped, unsafe ships. Although many of the settlers did not make the long passage alive, those who did see the shores of North America perceived great opportunities before them. Many of the families that came from England went on to make essential contributions to the emerging nations of Canada and the United States. Research into various historical records revealed some of first members of the Layton family emigrate to North America:

Layton Settlers in United States in the 17th Century

Layton Settlers in United States in the 18th Century

Layton Settlers in United States in the 19th Century

Layton Settlers in Canada in the 18th Century

Layton Settlers in Australia in the 19th Century

Layton Settlers in New Zealand in the 19th Century

Layton Settlers in West Indies in the 17th Century

Historic Events for the Layton family +

Suggested Readings for the name Layton +