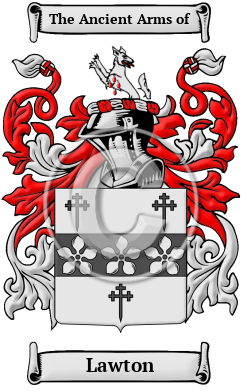 The name Lawton first arose amongst the Anglo-Saxon tribes of Britain. It is derived from their having lived in the village of Lawton which was in both Cheshire and Herefordshire. This place-name was originally derived from the Old English words hlaw tun, which means that the original bearers of the surname lived in the farm that was located on the hill.

Early Origins of the Lawton family

The surname Lawton was first found in Cheshire where the parish named Laughton dates back to at least the Domesday Book where it was listed as Lestone [1]. Church Lawton is a small village and civil parish in Cheshire East and was recorded in the Domesday Book as Lautune. There are at least three other listings of places now named Laughton in the Domesday Book: Lachestone in Leicester, Lastone in Yorkshire and finally Loctone in Lincolnshire. The latter is believed to have been derived from the Old English words "loc" + "tun" and meant "enclosure that can be locked" [2]

The parish of Lowton in Lancashire "gave name to a family who subsequently adopted the surname of Kenyon from their possessions in a neighbouring township." [3]

Lorton is a parish, in the union of Cockermouth, Allerdale ward above Derwent in Cumberland. It comprises two small villages Low Lorton and High Lorton and dates back to c. 1150 when it was known as Loretona. It probably meant "farmstead on a stream called Hlora" from the Viking river name meaning "roaring one" + and the Old English word "tun." [2]

Early History of the Lawton family

This web page shows only a small excerpt of our Lawton research. Another 77 words (6 lines of text) covering the years 1250, 1660, 1721, 1693, 1670 and 1723 are included under the topic Early Lawton History in all our PDF Extended History products and printed products wherever possible.

One relatively recent invention that did much to standardize English spelling was the printing press. However, before its invention even the most literate people recorded their names according to sound rather than spelling. The spelling variations under which the name Lawton has appeared include Lawton, Laughton, Loughmane and others.

Another 50 words (4 lines of text) are included under the topic Early Lawton Notables in all our PDF Extended History products and printed products wherever possible.

Migration of the Lawton family to Ireland

Some of the Lawton family moved to Ireland, but this topic is not covered in this excerpt. More information about their life in Ireland is included in all our PDF Extended History products and printed products wherever possible.

Lawton migration to the United States +

At this time, the shores of the New World beckoned many English families that felt that the social climate in England was oppressive and lacked opportunity for change. Thousands left England at great expense in ships that were overcrowded and full of disease. A great portion of these settlers never survived the journey and even a greater number arrived sick, starving, and without a penny. The survivors, however, were often greeted with greater opportunity than they could have experienced back home. These English settlers made significant contributions to those colonies that would eventually become the United States and Canada. An examination of early immigration records and passenger ship lists revealed that people bearing the name Lawton arrived in North America very early:

Lawton Settlers in United States in the 17th Century

Lawton Settlers in United States in the 18th Century

Lawton Settlers in United States in the 19th Century

Lawton Settlers in Canada in the 18th Century

Lawton Settlers in Canada in the 19th Century

Lawton Settlers in Australia in the 19th Century

Lawton Settlers in New Zealand in the 19th Century

Lawton Settlers in West Indies in the 18th Century

Historic Events for the Lawton family +

Suggested Readings for the name Lawton +