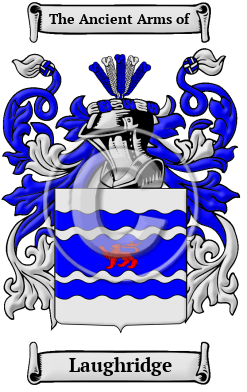 This Laughridge surname is an Anglicized form of the Gaelic "Luachra," derived from the word "luachair," which means "rushes" or "sedges."

Early Origins of the Laughridge family

The surname Laughridge was first found in Armagh (Irish: Ard Mhacha) located in the province of Ulster in present day Northern Ireland, where they held a family seat as ecclesiastics in west Armagh and Antrim. Irish history was greatly influenced by the Norman invasion of 1172, and thereafter, the surnames of Irish Gaelic clanns and septs and many of the Norman families became almost indistinguishable. This family name was found later in Tyrone about 1430.

Early History of the Laughridge family

This web page shows only a small excerpt of our Laughridge research. Another 95 words (7 lines of text) covering the years 1416, 1576, 1612, and 1652 are included under the topic Early Laughridge History in all our PDF Extended History products and printed products wherever possible.

More information is included under the topic Early Laughridge Notables in all our PDF Extended History products and printed products wherever possible.

Migration of the Laughridge family

Some of the first settlers of this family name or some of its variants were: Owen Loughran, who was an 'enforced emigrant' from Ireland to America in 1738; Peter Loughran, who was recorded in Philadelphia in 1826; Jeremiah Loughry, who arrived in New York in 1740.