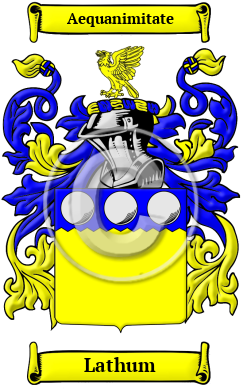 The ancestors of the bearers of the Lathum family name are thought have lived in ancient Anglo-Saxon England. They were first found in Latham in the West Riding of Yorkshire, in Lathom in Lancashire and Laytham in the East Riding of Yorkshire. The place-name Latham was originally derived from the Old Norse word hlathum, which is the plural form of hlath, which means a barn. Therefore the original bearers of the Lathum surname were dwellers at the barns. [1] [2]

Early Origins of the Lathum family

The surname Lathum was first found in Lancashire at Lathom, a village and civil parish about 5 km northeast of Ormskirk. The place name dates back to the Domesday Book of 1086 where it was listed as Latune [3] and later as Lathum in 1200, and Lathom in 1223. One of the earliest records of the name was Robert Fitzhenry de Lathom who held lands throughout south Lancashire in 1189. The lands were "bestowed by Robert de Lathom upon the newly-founded priory of Burscough in 1189." [4]

Presumably one of his descendants, Robert de Lathom in 1292 was sued by Richard, son of John de Burscough concerning a tenement in Burscough, but the case was non-suited." [4]

"This place was the seat of the Lathom family, of whom Robert de Lathom, in the reign of Edward I., received the grant of a weekly market and an annual fair, and whose baronial mansion of Lathom House, remarkable for its extent and magnificence, and formidable for its strength, afterwards became so conspicuous in history. " [5]

At Whiston in the parish of Prescot, "in the reign of Richard II. the Lathoms had estates here, which descended through several generations; and the Torbocks, of whom the Lathoms were a branch, were, at a very remote period, possessed of Rudgate, in this manor." [5]

The parish of Huyton was another ancient family seat. "The Lathoms were early proprietors, being mentioned in the reign of Henry III. The original church was of considerable antiquity, having been granted to the priory of Burscough, at the time of its foundation, by the first (aforementioned) Robert de Lathom." [5]

Early History of the Lathum family

This web page shows only a small excerpt of our Lathum research. Another 106 words (8 lines of text) covering the years 1200, 1610, 1677 and are included under the topic Early Lathum History in all our PDF Extended History products and printed products wherever possible.

Until quite recently, the English language has lacked a definite system of spelling rules. Consequently, Anglo-Saxon surnames are characterized by a multitude of spelling variations. Changes in Anglo-Saxon names were influenced by the evolution of the English language, as it incorporated elements of French, Latin, and other languages. Although Medieval scribes and church officials recorded names as they sounded, so it is common to find one person referred to by several different spellings of his surname, even the most literate people varied the spelling of their own names. Variations of the name Lathum include Latham, Lathem, Lathom and others.

Another 35 words (2 lines of text) are included under the topic Early Lathum Notables in all our PDF Extended History products and printed products wherever possible.

Migration of the Lathum family to Ireland

Some of the Lathum family moved to Ireland, but this topic is not covered in this excerpt.
Another 57 words (4 lines of text) about their life in Ireland is included in all our PDF Extended History products and printed products wherever possible.

Lathum migration to the United States +

Searching for a better life, many English families migrated to British colonies. Unfortunately, the majority of them traveled under extremely harsh conditions: overcrowding on the ships caused the majority of the immigrants to arrive diseased, famished, and destitute from the long journey across the ocean. For those families that arrived safely, modest prosperity was attainable, and many went on to make invaluable contributions to the development of the cultures of the new colonies. Research into the origins of individual families in North America revealed records of the immigration of a number of people bearing the name Lathum or a variant listed above:

Lathum Settlers in United States in the 17th Century

Lathum Settlers in Canada in the 18th Century