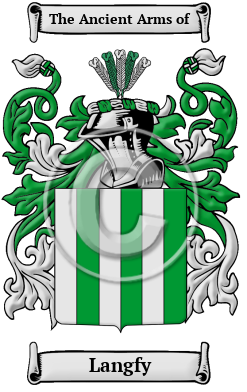 The ancient history of the Langfy name begins with the ancient Anglo-Saxon tribes of Britain. The name is derived from when the family resided in Langley in five counties in ancient Britain. Literally, the place name means "long wood or clearing," from the Old English words "land" + "leah." The name has Saxon roots too as the oldest place we found was in Langley, Kent where it was listed as Longanleag in 814. The next earliest was in Wiltshire where Langelegh was listed in 940, both before the Norman Conquest in 1066. [1]

Early Origins of the Langfy family

The surname Langfy was first found in Durham where they held a family seat from very ancient times. Some of the first records of the name were listed in the Hundredorum Rolls of 1273: Thomas Langeleye in Oxford; Peter de Langlege in Wiltshire; and Ralph de Langleye in Kent. [2]

Early History of the Langfy family

Until quite recently, the English language has lacked a definite system of spelling rules. Consequently, Anglo-Saxon surnames are characterized by a multitude of spelling variations. Changes in Anglo-Saxon names were influenced by the evolution of the English language, as it incorporated elements of French, Latin, and other languages. Although Medieval scribes and church officials recorded names as they sounded, so it is common to find one person referred to by several different spellings of his surname, even the most literate people varied the spelling of their own names. Variations of the name Langfy include Langley, Langlee, Langleigh and others.

Notables of the family at this time include Edmund of Langley, 1st Duke of York, 1st Earl of Cambridge, (1341-1402), a medival prince; Thomas Langley (c.1363-1437), an English prelate, Dean of York, Bishop of Durham, twice Lord Chancellor of England, the second longest serving Chancellor of the Middle Ages; Sir Robert Langley, appointed Dean of York in 1386, though his...
Another 60 words (4 lines of text) are included under the topic Early Langfy Notables in all our PDF Extended History products and printed products wherever possible.

Migration of the Langfy family to Ireland

Some of the Langfy family moved to Ireland, but this topic is not covered in this excerpt. More information about their life in Ireland is included in all our PDF Extended History products and printed products wherever possible.

Migration of the Langfy family