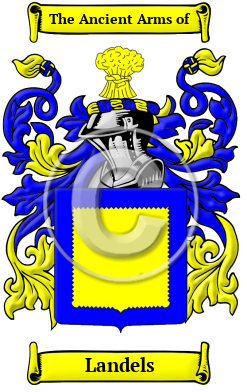 The history of the Landels family name begins after the Norman Conquest of 1066. They lived near a forest which is derived from the Old French word launde, which means forest glade. The English Landels family was originally of Landells of Bire in Normandy. The family name Landels was brought to England after the Norman Conquest, when William the Conqueror gave his friends and relatives most of the land formerly owned by Anglo-Saxon aristocrats. The surname Landels was established by Norman landholders in the county of Roxburghshire.

Early Origins of the Landels family

The surname Landels was first found in Roxburghshire where they granted lands by King David of Scotland about 1150. They were originally of Landells in Bire in Normandy.

Early History of the Landels family

This web page shows only a small excerpt of our Landels research. Another 102 words (7 lines of text) covering the years 1296 and 1341 are included under the topic Early Landels History in all our PDF Extended History products and printed products wherever possible.

Anglo-Norman names tend to be marked by an enormous number of spelling variations. This is largely due to the fact that Old and Middle English lacked any spelling rules when Norman French was introduced in the 11th century. The languages of the English courts at that time were French and Latin. These various languages mixed quite freely in the evolving social milieu. The final element of this mix is that medieval scribes spelled words according to their sounds rather than any definite rules, so a name was often spelled in as many different ways as the number of documents it appeared in. The name was spelled Landale, Lansdale, Landall, Landell, Landells and many more.

More information is included under the topic Early Landels Notables in all our PDF Extended History products and printed products wherever possible.

Landels Settlers in New Zealand in the 19th Century