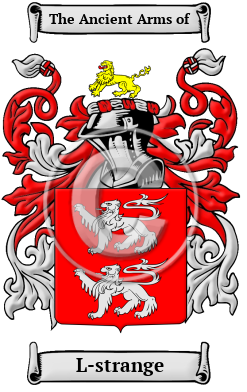 The first bearer of the name L-strange most likely took on this name based on an early member of the family who was a "stranger." Nicknames come from the category of surnames known as hereditary surnames. They were adopted from a variety of sources including, physical characteristics, behaviour, mannerisms, and other personal attributes. L-strange would have been given to someone who was new in the village or parish. In the Middle Ages, the vast majority of people never traveled any more than thirty miles or so from the place of their birth. Travel and emigration was reserved for the nobility, by and large. The surname L-strange was derived from the Old French word estrange, which meant foreign. This is a name associated with the Bretons, a culture from the peninsula of Brittany, in the northwest of France. Formerly known as Armorica, a possession of the Roman Empire, this land consists of a plateau with a deeply indented coast and is broken by hills in the west. However, the region was renamed Britannia Minor by the Romans, following the emigration of six thousand Britons across the English Channel, an event which took place at the behest of the Roman Commander in Britain.

Early Origins of the L-strange family

The surname L-strange was first found in Derbyshire where they held a family seat as Lords of the manor of Pevell's Castle in the peak of Derbyshire. Guido le Strange, son of the Duke of Brittany was present at a joust with Owen, Prince of Wales and the Scottish Prince. Guido le Strange was ancestor of the various baronial houses of L'Strange and Strange. "The church [in Wellesbourn-Hastings in Warwickshire] is partly Norman, and partly in the early English style, with a tower of later character, and contains a monument to the memory of Sir Thomas le Strange, lord-lieutenant of Ireland in the reign of Henry VI." [1]

Roger Le Strange (died 1311), was an early English jurist, "a descendant of Guy Le Strange, who is thought to have been a younger son of Hoel II, Duke of Brittany (1066-1084). He was sheriff of Yorkshire during the last two years of the reign of Henry III, and the first two of that of Edward I. " [2]

Early History of the L-strange family

There are many spelling variations of Breton surnames, because the Old and Middle English languages lacked definite spelling rules. The official court languages, which were Latin and French, were also influential on the spelling of a surname. Since the spelling of surnames was rarely consistent in medieval times, and scribes and church officials recorded names as they sounded rather than adhering to any specific spelling rules, it was common to find references to one individual with many different spellings of their surname in the ancient chronicles. Moreover, a large number of foreign names were brought into England, which accelerated and accentuated the alterations to the spelling of various surnames. The name has been spelled Strange, Strang and others.

Migration of the L-strange family to Ireland

Some of the L-strange family moved to Ireland, but this topic is not covered in this excerpt.
Another 57 words (4 lines of text) about their life in Ireland is included in all our PDF Extended History products and printed products wherever possible.

Migration of the L-strange family

Records show the name L-strange in some of the earliest immigrant records of North America: Christian Strang who settled in New Jersey in 1685; followed by Christopher 1686; Caleb and Maria Strang settled in Philadelphia, Pennsylvania in 1774.