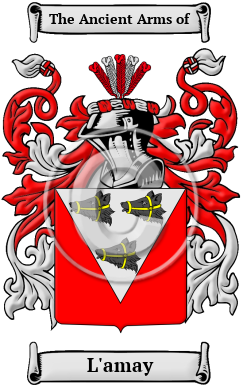 Early Origins of the L'amay family

The surname L'amay was first found in Cornwall where they held a family seat as Lords of the Botienne Castle in Cornwall. "In the thirteenth century Richard Amy held from Henry de la Pomeray in Cornwall. His descendants were to be found there till the middle of last century. Mr. Amy, Sheriff of the county in 1714, inherited Botreaux Castle from his uncle Sir John Cotton, and was the father of Cotton Amy, the last heir male, who left only two daughters." [1] Since then, their influence has moved east into Devon, Somerset and Dorset. The Hundredorum Rolls of 1273 list Simone and John Ame in Essex temp. Edward I.

Early History of the L'amay family

This web page shows only a small excerpt of our L'amay research. Another 110 words (8 lines of text) covering the years 161 and 1619 are included under the topic Early L'amay History in all our PDF Extended History products and printed products wherever possible.

More information is included under the topic Early L'amay Notables in all our PDF Extended History products and printed products wherever possible.

Migration of the L'amay family