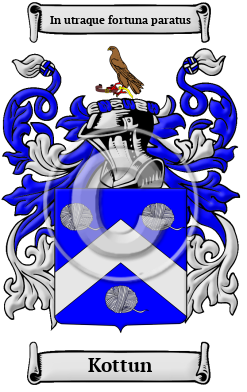 The ancient roots of the Kottun family name are in the Anglo-Saxon culture. The name Kottun comes from when the family lived in one of a number of similarly named settlements throughout England. Coton is found in Cambridgeshire, while Cotton was in Cheshire. There are places called Coatham in Durham and the North Riding of Yorkshire. Cotham is in Nottinghamshire. Settlements named Cottam exist in both Nottinghamshire and the East Riding of Yorkshire. All of these names stem from the Old English phrase æt cotum, which means at the cottages. Thus, the surname Kottun belongs to the class of topographic surnames, which were given to people who resided near physical features such as hills, streams, churches, or types of trees.

Early Origins of the Kottun family

Early History of the Kottun family

Distinguished members of the family include Blessed Thomas Cottam (1549-1582), English Catholic priest and martyr; William Cotton (d. 1621), Bishop of Exeter, 1598 to 1621; John Cotton (1585-1652), English clergyman, American settler in 1633 and became one of the most important New England Puritan ministers; Sir Robert Bruce Cotton of Connington, 1st Baronet (1570-1631), English politician, founder of the Cotton or Cottonian library, an antiquarian and bibliophile, and was the basis of the British Library; Sir Thomas Cotton, 2nd Baronet...
Another 79 words (6 lines of text) are included under the topic Early Kottun Notables in all our PDF Extended History products and printed products wherever possible.

Migration of the Kottun family to Ireland

Some of the Kottun family moved to Ireland, but this topic is not covered in this excerpt.
Another 36 words (3 lines of text) about their life in Ireland is included in all our PDF Extended History products and printed products wherever possible.

Migration of the Kottun family

At this time, the shores of the New World beckoned many English families that felt that the social climate in England was oppressive and lacked opportunity for change. Thousands left England at great expense in ships that were overcrowded and full of disease. A great portion of these settlers never survived the journey and even a greater number arrived sick, starving, and without a penny. The survivors, however, were often greeted with greater opportunity than they could have experienced back home. These English settlers made significant contributions to those colonies that would eventually become the United States and Canada. An examination of early immigration records and passenger ship lists revealed that people bearing the name Kottun arrived in North America very early: Robert Cotton, who arrived in Virginia in 1607, thirteen years before the "Mayflower; John and Sara Cotton who settled in Boston Massachusetts in 1633.