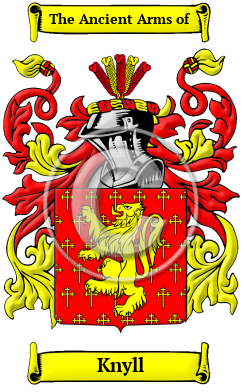 Early Origins of the Knyll family

The surname Knyll was first found in Herefordshire at Knill, a parish, in the union of Presteign, hundred of Wigmore. Originally listed as Chenille in the Domesday Book of 1086, [1] the place name literally means "place at the hillock. [2]

The surname is descended from the tenant of the lands and village of Knill, held by Osbern FitzRichard, and Norman noble, who was recorded in the Domesday Book census of 1086. Sir John de Knill was Lord of Knill in the 12th century.

In Somerset, the earliest record of the family was John atte Knyle. [5] We also found this interesting entry: "Sir John, a younger son of the unfortunate William de Braose, temp. King John, having received from his father the manor of Knylle or Knill, in the marches of Wales (co. Hereford), adopted De Knill as his surname. Knill of Knill became extinct in the XVII. cent." [6]

In the parish of St. Ives, Cornwall, near the manor of Lelant and Trevethow, "a pyramid, [can be found] which is a conspicuous object both by sea and land, and is equally singular through the cause of its erection. It was built by order of John Knill, Esq. a bencher of Gray's Inn, who was some time collector of the port of St. Ives, and was afterwards secretary to Lord Hobart, when he was lord lieutenant of Ireland. In this mausoleum it was his intention that his mortal remains should be interred. On one side of this pyramid, in which the niche for his coffin was made, stands inscribed his name, 'Johannes Knill;' on another is the word 'Resurgam :' and on a third, 'I know that my Redeemer liveth.' To perpetuate his name, he directed, that at the end of every five years after his decease, an elderly woman, and ten girls, each under fourteen years of age, dressed in white, should walk in procession from the market-house in St. Ives to the pyramid, accompanied with music, and that they should dance round this mausoleum singing the hundredth psalm." [7]

Early History of the Knyll family

This web page shows only a small excerpt of our Knyll research. Another 112 words (8 lines of text) covering the years 1510, 1600, 1140, 1159, 1442 and 1545 are included under the topic Early Knyll History in all our PDF Extended History products and printed products wherever possible.

It is only in the last few hundred years that the English language has been standardized. For that reason, Anglo-Norman surnames like Knyll are characterized by many spelling variations. Scribes and monks in the Middle Ages spelled names they sounded, so it is common to find several variations that refer to a single person. As the English language changed and incorporated elements of other European languages such as Norman French and Latin, even literate people regularly changed the spelling of their names. The variations of the name Knyll include Knill, Knyll, Knyl, Knil, Nill, Nyll, Nil, Nyl, Knoll, Knell and many more.

More information is included under the topic Early Knyll Notables in all our PDF Extended History products and printed products wherever possible.

Migration of the Knyll family

Faced with the chaos present in England at that time, many English families looked towards the open frontiers of the New World with its opportunities to escape oppression and starvation. People migrated to North America, as well as Australia and Ireland in droves, paying exorbitant rates for passages in cramped, unsafe ships. Many of the settlers did not make the long passage alive, but those who did see the shores of North America were welcomed with great opportunity. Many of the families that came from England went on to make essential contributions to the emerging nations of Canada and the United States. Some of the first immigrants to cross the Atlantic and come to North America carried the name Knyll, or a variant listed above: Charles Knill, who settled in New England in 1633; John Knill, who arrived in Virginia sometime between 1654 and 1663; Robert Knill, who came to New York in 1856.