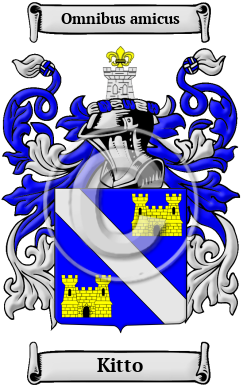 The name Kitto was first used by the ancient Strathclyde-Briton people of the Scottish/English Borderlands. The first Kitto to use this name no doubt lived in Norfolk, England; or the name may also be from Chetel, an Old Norse and Old English given name.

Early Origins of the Kitto family

The surname Kitto was first found in Aberdeenshire (Gaelic: Siorrachd Obar Dheathain), a historic county, and present day Council Area of Aberdeen, located in the Grampian region of northeastern Scotland, where they held a family seat from very ancient times.

Early History of the Kitto family

This web page shows only a small excerpt of our Kitto research. Another 67 words (5 lines of text) covering the years 1403, 1597, and 1633 are included under the topic Early Kitto History in all our PDF Extended History products and printed products wherever possible.

Scribes in Medieval Scotland spelled names by sound rather than any set of rules, so an enormous number of spelling variations exist in names of that era. Kitto has been spelled Catto, Cattoch, Cattow, Kitto, Citto, Chatto, Chattoch, Chetto, Cato and many more.

More information is included under the topic Early Kitto Notables in all our PDF Extended History products and printed products wherever possible.

Kitto migration to the United States +

Kitto Settlers in United States in the 19th Century

Kitto Settlers in United States in the 20th Century

Kitto Settlers in Australia in the 19th Century

Kitto Settlers in New Zealand in the 19th Century

Motto: Omnibus amicus
Motto Translation: A friend to everyone.