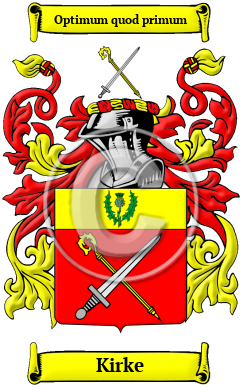 The surname Kirke is a topographic surname, which was given to a person who resided near a physical feature such as a hill, stream, church, or type of tree. Habitation names form the other broad category of surnames that were derived from place-names. They were derived from pre-existing names for towns, villages, parishes, or farmsteads. Other local names are derived from the names of houses, manors, estates, regions, and entire counties. As a general rule, the greater the distance between an individual and their homeland, the larger the territory they were named after. For example, a person who only moved to another parish would be known by the name of their original village, while people who migrated to a different country were often known by the name of a region or country from which they came. The name Kirke translates as church, and indicates that the original bearer of the name lived in a village with a prominent church.

Early Origins of the Kirke family

The surname Kirke was first found in Cumberland, where they held a family seat from very early times and were granted lands by Duke William of Normandy, their liege Lord, for their distinguished assistance at the Battle of Hastings in 1066 A.D.

Early History of the Kirke family

Spelling variations of this family name include: Kirk, Kirkhoe, Kirkaugh, Kirko, Kirkoe and others.

Notable among the family at this time was Edward Kirke (1553-1613), English poet ans scholar, a close friend of the poet Spenser; Robert Kirk (1644-1692), a Scottish minister, Gaelic scholar and folklorist from Aberfoyle, Stirling, best known for his "The Secret Commonwealth," a treatise on fairy folklore, witchcraft and ghosts; John Kirke (fl. 1638), English dramatist, author of a popular tragic comedy "The...
Another 63 words (4 lines of text) are included under the topic Early Kirke Notables in all our PDF Extended History products and printed products wherever possible.

Migration of the Kirke family to Ireland

Some of the Kirke family moved to Ireland, but this topic is not covered in this excerpt.
Another 76 words (5 lines of text) about their life in Ireland is included in all our PDF Extended History products and printed products wherever possible.

Kirke migration to the United States +

Kirke Settlers in United States in the 17th Century

Kirke Settlers in New Zealand in the 19th Century

Kirke Settlers in West Indies in the 17th Century

Motto: Optimum quod primum
Motto Translation: That is best that is first.