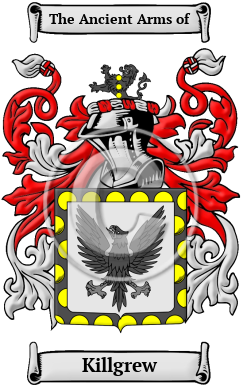 The Killgrew history begins in Cornwall, a rugged coastal region in southwestern England. Quite distinct from Devon, the adjoining county, Cornwall had its own spoken language until the late 18th century. The Killgrew history began here. The manner in which hereditary surnames arose is interesting. Local surnames were derived from where the original bearer lived, was born, or held land. Unlike most Celtic peoples, who favored patronymic names, the Cornish predominantly used local surnames. The Killgrew family originally lived in Cornwall, at the manor of Cheligrevus, from which they took their name. [1]

Early Origins of the Killgrew family

The surname Killgrew was first found in Cornwall where "a manor in the parish of St. Erme, where this celebrated family resided from an early date down to the reign of Richard II." [1]

Early History of the Killgrew family

Notable amongst the family at this time was Sir Robert Killigrew (1580-1633) of Arwenack in Falmouth, Cornwall, knighted by King James I in 1603, Ambassador to the United Provinces; his daughter Elizabeth Boyle (née Killigrew), Viscountess Shannon (1622-1680), an English courtier; Mary Killegrew, who was the mother of Frederick Nassau de Zulestein (1608-1672), 1st Earl of Rochford; Thomas Killigrew, (1612-1683) English dramatist and theater manager...
Another 65 words (5 lines of text) are included under the topic Early Killgrew Notables in all our PDF Extended History products and printed products wherever possible.

Migration of the Killgrew family to Ireland

Some of the Killgrew family moved to Ireland, but this topic is not covered in this excerpt. More information about their life in Ireland is included in all our PDF Extended History products and printed products wherever possible.

Migration of the Killgrew family

Research into the origins of individual families in North America has revealed records of the immigration of a number of people bearing the name Killgrew or a variant listed above: Anne Killigroue settled in Boston in 1679; with her sister Elizabeth who spelled her name Killigrew; Hannah Killegrew settled in Virginia with her husband in 1748..