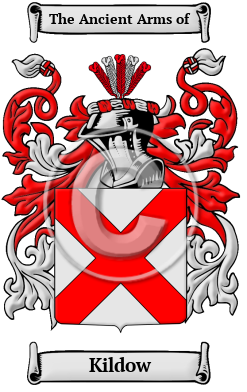 Early Origins of the Kildow family

The surname Kildow was first found in Kildare (Irish:Cill Dara), ancient homeland of the Kildare based Uí Dúnlainge (Kings of Leinster), located in the Province of Leinster, where they held a family seat as and descended from the Fitzgeralds of Kildare. This notable Irish clann were descended from Robert Fitzwalter, son of Baron Ortho Geraldino, who attended Strongbow in his invasions of Ireland. The Fitzgeralds divided into two main branches, that of Kildare and the more populous Desmond branch which gave birth to the Earls of Desmond. Irish history, after the Norman Conquest of England, was strongly influenced by the invasion of Strongbow in 1169 onward, almost equal to the enormous Irish cultural impact on England Scotland, Wales and the whole of Europe before the Norman Conquest from the 1st to 7th centuries. Many Irish clanns, sept names were intermixed and family groupings became almost indistinguishable. This family name was found later in Kildare where they represented the first recorded reference to the name.

Early History of the Kildow family

This web page shows only a small excerpt of our Kildow research. Another 112 words (8 lines of text) covering the year 1637 is included under the topic Early Kildow History in all our PDF Extended History products and printed products wherever possible.

Spelling variations of this family name include: Kildare, Gildare, O'Kildare and others.

More information is included under the topic Early Kildow Notables in all our PDF Extended History products and printed products wherever possible.

Migration of the Kildow family