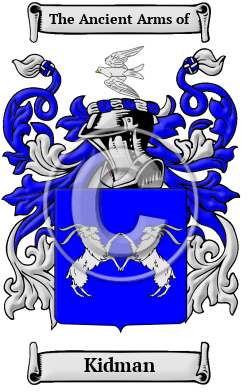 The Kidman surname comes from the Middle English word "kid(e)," which referred to a young goat. The name may have originally been a nickname for someone energetically kid-like, or it may have occupational for a herder of goats.

Early Origins of the Kidman family

The surname Kidman was first found in Suffolk and Northamptonshire, where a William, Ralp Kide was on record in 12th century Pipe Rolls for those counties. An Alan Kydeman was also on record in Norfolk, in the 1275 Rotuli Hundredorum. The Hundredorum Rolls also lists Reginald Kidd. The Yorkshire Poll Tax Rolls of 1379 had three entries: Ricardus Kyd; Thomas Kydde; and Willelmus Kydde. [1]

The Pipe Rolls listed William Kide in Suffolk in 1181 and Ralph Kide in Northumberland in 1198. [2]

Early History of the Kidman family

Norman surnames are characterized by a multitude of spelling variations. The frequent changes in surnames are largely due to the fact that the Old and Middle English languages lacked definite spelling rules. The introduction of Norman French to England, as well as the official court languages of Latin and French, also had pronounced influences on the spelling of surnames. Since medieval scribes and church officials recorded names as they sounded, rather than adhering to any specific spelling rules, it was common to find the same individual referred to with different spellings. The name has been spelled Kidd, Kydd, Kidman, Kideman, Kidde, Kydeman and others.

Outstanding amongst the family at this time was William Kyd (fl. 1430-1453), a 15th-century English pirate active in South West England from the 1430s until the 1450s. In November 1453, in perhaps the biggest prize of his career, he captured The Marie of St. Andrews. He and others were virtually immune from the law for over two decades by the protection of corrupt custom officials. John Kidd (1775-1851), physician, born in London 10 Sept...
Another 72 words (5 lines of text) are included under the topic Early Kidman Notables in all our PDF Extended History products and printed products wherever possible.

Migration of the Kidman family to Ireland

Some of the Kidman family moved to Ireland, but this topic is not covered in this excerpt.
Another 59 words (4 lines of text) about their life in Ireland is included in all our PDF Extended History products and printed products wherever possible.

Kidman Settlers in Australia in the 19th Century

Kidman Settlers in New Zealand in the 19th Century