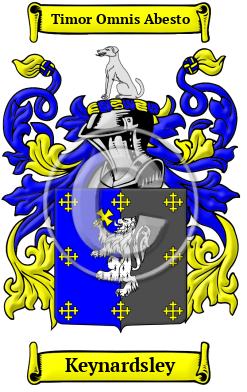 The ancient history of the Keynardsley name begins with the ancient Anglo-Saxon tribes of Britain. The name is derived from when the family resided in Kinnersley or Kinnerley. Kinnerley is found in Salop (now called Shropshire), and Kinnersley, in Herefordshire. The place-names come from a similar root, though.

Early Origins of the Keynardsley family

The surname Keynardsley was first found in Herefordshire where, according to an ancient manuscript the family is possessed of a very ancient pedigree. The manuscript reads: "The family of the Kynnersley is very ancient, being seated long before the Norman Conquest (1066 A.D) in the commune of Hereford in a castle so called at present. In the Domesday Book it is recorded that when William the Conqueror was possessed of his new kingdom he sent his commissioners throughout ye remote parts thereof (1086,) to knowe how every man held his lands. In which tyme there was an ould gentleman that lived and was owner of Kynnardsley Castle in Hereford by name John de Kynnardsley, and by title a knight (if any knights were before the Conquest). This old gentleman was blind, he had then livving with him twelve sonnes (sons,) whom with himself he armed, and stood in his castle gate, his halberd in his hand, attending the coming of sheriffs and other commisioners from ye king, who being arrived, demanded of him by what tenure he held his castle and lands; ye old knight replyed by his armes, showing to them his halberd."

Early History of the Keynardsley family

Until quite recently, the English language has lacked a definite system of spelling rules. Consequently, Anglo-Saxon surnames are characterized by a multitude of spelling variations. Changes in Anglo-Saxon names were influenced by the evolution of the English language, as it incorporated elements of French, Latin, and other languages. Although Medieval scribes and church officials recorded names as they sounded, so it is common to find one person referred to by several different spellings of his surname, even the most literate people varied the spelling of their own names. Variations of the name Keynardsley include Keynardsley, Kennersley, Kenersley, Kynnardsley, Kinnardsley, Kinnersley, Kynnersley, Kynersley, Kynersly, Kynnersly, Kinnersly, Kinersly, Kinnersley and many more.

Distinguished members of the family include John De Kynardsley (1282-1350), English landowner who married Johanne De Kynardsley (née Ferrars) in 1327 and had John de Kynardsley...
Another 26 words (2 lines of text) are included under the topic Early Keynardsley Notables in all our PDF Extended History products and printed products wherever possible.

Migration of the Keynardsley family

Searching for a better life, many English families migrated to British colonies. Unfortunately, the majority of them traveled under extremely harsh conditions: overcrowding on the ships caused the majority of the immigrants to arrive diseased, famished, and destitute from the long journey across the ocean. For those families that arrived safely, modest prosperity was attainable, and many went on to make invaluable contributions to the development of the cultures of the new colonies. Research into the origins of individual families in North America revealed records of the immigration of a number of people bearing the name Keynardsley or a variant listed above: Phillip Kennersley who settled in Virginia in 1635.