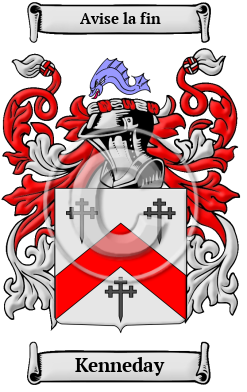 The ancestors of the Kenneday family lived among the Strathclyde-Briton people in the Scottish/English Borderlands. It is a name for a dour or serious person. Further research revealed that the name is derived from the Gaelic nickname Cinneididh, which translates as grim-headed. It is doubtful that there is any ancient relationship between the Irish Kennedys and the Scottish Clan.

Early Origins of the Kenneday family

The surname Kenneday was first found in Ayrshire (Gaelic: Siorrachd Inbhir Àir), formerly a county in the southwestern Strathclyde region of Scotland, that today makes up the Council Areas of South, East, and North Ayrshire, where the earliest record of them dates from 1185, during the reign of King William the Lion, when a Henry Kennedy was reported to have been involved in a rebellion in Galloway but died in battle.

Early History of the Kenneday family

Prior to the first dictionaries, scribes spelled words according to sound. This, and the fact that Scottish names were repeatedly translated from Gaelic to English and back, contributed to the enormous number of spelling variations in Scottish names. Kenneday has been spelled Kennedy, Kannady, Kenardy, Kennaday, Kenneday, Kenneyday, Kennediem, MacKennedy, MacUalraig (Gaelic) and many more.

Migration of the Kenneday family to Ireland

Some of the Kenneday family moved to Ireland, but this topic is not covered in this excerpt.
Another 77 words (6 lines of text) about their life in Ireland is included in all our PDF Extended History products and printed products wherever possible.

Kenneday migration to the United States +

Kenneday Settlers in United States in the 17th Century

Kenneday Settlers in United States in the 18th Century

Kenneday Settlers in United States in the 19th Century