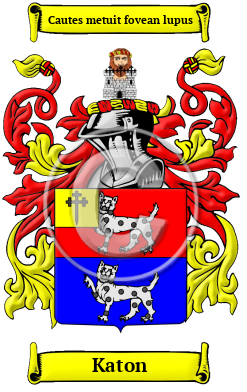 One source notes that the family may have been anciently Norman in origin: "Herebert Katune, of Normandy, 1198 (Magni Rotuli Scaccarii Normanniae). This may mean the English family of De Catton, which it shows to have been Norman." [2]

Early Origins of the Katon family

The surname Katon was first found in Norfolk "from time immemorial till the middle of the last century. Until the close of the XVI. cent., Catton and De Catton; from the manor of Catton near Norwich, which in Domesday is spelt Catun and Catuna. The Latinizations Catonus, Gathonus, and Chattodunus occur in old records." [3]

"The Catons of Essex are probably a branch of the ancient family of Caton or Catton of Norfolk." [4]

Walter Catton or Chattodunus (d. 1343), was "a Franciscan friar of Norwich, was, according to some authorities, head of the Minorite convent situated between the churches of St. Cuthbert and St. Vedast. He seems to have been an author of some repute in his generation, and was, according to Bale, a great student of Aristotle. Towards the close of his life he was summoned to Avignon by the Pope, and died a penitentiary in that city in 1343. " [5]

Early History of the Katon family

This web page shows only a small excerpt of our Katon research. Another 95 words (7 lines of text) covering the years 1296, 1636, 1665 and 1652 are included under the topic Early Katon History in all our PDF Extended History products and printed products wherever possible.

The English language only became standardized in the last few centuries; therefore,spelling variations are common among early Anglo-Saxon names. As the form of the English language changed, even the spelling of literate people's names evolved. Katon has been recorded under many different variations, including Caton, Catton, Cattan, Catten, Caten and others.

Distinguished members of the family include William Caton (1636-1665), an early English Quaker itinerant preacher and writer. He "was probably a near relation of Margaret Askew, afterwards wife of Thomas Fell, vice-chancellor of the duchy of Lancaster. At the age of fourteen he was taken by his father to the judge's house at Swarthmore...
Another 53 words (4 lines of text) are included under the topic Early Katon Notables in all our PDF Extended History products and printed products wherever possible.

Katon migration to the United States +

For many English families, the political and religious disarray that shrouded England made the far away New World an attractive prospect. On cramped disease-ridden ships, thousands migrated to those British colonies that would eventually become Canada and the United States. Those hardy settlers that survived the journey often went on to make important contributions to the emerging nations in which they landed. Analysis of immigration records indicates that some of the first North American immigrants bore the name Katon or a variant listed above:

Katon Settlers in United States in the 17th Century

Katon Settlers in United States in the 19th Century