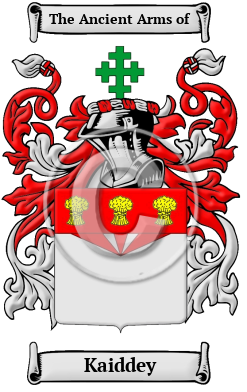 The name Kaiddey is of Anglo-Saxon origin and came from the Old English personal name Cada. With the addition of the diminutive suffix -man, this personal name was popular as late as the 13th century in the forms of Cadman and Cademan. Kaiddey was originally derived from a pet form of this name. [1]

Alternatively, the name could have been Cadia in Gaelic and in this case, it literally meant "the house of God." [2]

Early Origins of the Kaiddey family

Later rolls revealed Margery Cade in Cambridgeshire in 1373 and William Cade in Lincolnshire in the same year. The Yorkshire Poll Tax Rolls of 1379 listed Matilda Cadi; Robertus Cadison; and Johannes Cady, 1379 as all holding lands there at that time. [4]

In Somerset, William Cade and Richard Cade were both listed there 1 Edward III (during the first year of King Edward III's reign.) [5]

Further north in Scotland where many of the family claim descent, John Cady was a tenant under the earl of Douglas in the barony of Kylbouho in 1376 and Thomas Cady was presbyter in Glasgow in 1440. Peter Cady was burgess of Edinburgh, in 1484, and three persons named Cadie are in Edinburgh Marriage Register from 1606. [6]

Early History of the Kaiddey family

This web page shows only a small excerpt of our Kaiddey research. Another 144 words (10 lines of text) covering the years 1086, 1240, 1574, 1577, 1327 and 1641 are included under the topic Early Kaiddey History in all our PDF Extended History products and printed products wherever possible.

Before English spelling was standardized a few hundred years ago, spelling variations of names were a common occurrence. Elements of Latin, French and other languages became incorporated into English through the Middle Ages, and name spellings changed even among the literate. The variations of the surname Kaiddey include Caddy, Caddie, Caddey, Cade, Cadde, Caide, Caidey, Caidde, Kade, Kaddie, Kaiddy and many more.

More information is included under the topic Early Kaiddey Notables in all our PDF Extended History products and printed products wherever possible.

Migration of the Kaiddey family

A great wave of immigration to the New World was the result of the enormous political and religious disarray that struck England at that time. Families left for the New World in extremely large numbers. The long journey was the end of many immigrants and many more arrived sick and starving. Still, those who made it were rewarded with an opportunity far greater than they had known at home in England. These emigrant families went on to make significant contributions to these emerging colonies in which they settled. Some of the first North American settlers carried this name or one of its variants: James Caddy and Robert Caddy who were farming in Virginia in 1650 and William Caddy who settled in Barbados in 1634. Another James Caddy came from Wales to Boston in 1635.