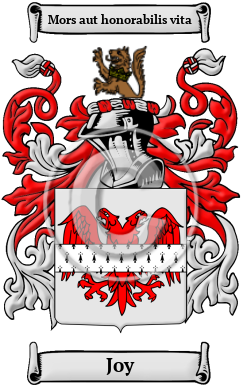 Early Origins of the Joy family

The surname Joy was first found in Glamorganshire (Welsh: Sir Forgannwg), a region of South Wales, anciently part of the Welsh kingdom of Glywysing.

However, the Welsh origin is very much overshadowed by the Irish predominance of the name in later years. In Ireland, the family was "of Welsh origin which became completely hibernicized; their territory was called Joyce's country. They also became one of the 'Tribes Of Galway' " [1]

Perhaps an exploration of one of the earliest entries for the name will assist. Thomas Jorz or Joyce, also called Thomas the Englishman (d. 1310), was an English "cardinal, is said to have been born of a good family in London, although he was perhaps, as has been sometimes suggested, a Welshman by descent. He was one of six brothers, who all entered the Dominican order. Two of them, Walter and Roland, were successively Archbishops of Armagh [Ireland]. " [2]

Walter Jorz or Jorse ( fl. 1306), "Archbishop of Armagh, was a Dominican of Oxford. Like Thomas Jorz [q. v.], his brother, he is doubtfully said to have been a disciple of Albertus Magnus, and a fellow-student with Thomas Aquinas." [2]

Early History of the Joy family

This web page shows only a small excerpt of our Joy research. Another 102 words (7 lines of text) covering the years 1086, 1172, 1487, 1647, 1647 and 1647 are included under the topic Early Joy History in all our PDF Extended History products and printed products wherever possible.

Church officials and medieval scribes often simply spelled names as they sounded. As a result, a single person's name may have been recorded a dozen different ways during his lifetime. Spelling variations for the name Joy include: Joyce, Joyes, Joy, Joice and others.

Notable amongst the family up to this time was Cornet George Joyce (fl. 1647), an officer in the Parliamentary New Model Army during the English Civil War. He is said to have been originally a tailor in London. He entered the army of the eastern association, appears to have served in Cromwell's regiment, and was in 1647 a cornet in the horse regiment of Sir Thomas Fairfax. When the quarrel between the army and...
Another 73 words (5 lines of text) are included under the topic Early Joy Notables in all our PDF Extended History products and printed products wherever possible.

Joy migration to the United States +

The Irish emigration during the late 18th and 19th century contributed to the melting pot of nationalities in North America, and the building of a whole new era of industry and commerce in what was seen as a rich, new land. Ireland's Great Potato Famine resulted in the worst economic and social conditions in the island's history. And in response to the hunger, disease, and poverty, during this decade the total number of emigrants to leave for North America rivaled all the previous years combined. Those from this decade that arrived on North American shores were not warmly welcomed by the established population, but they were vital to the rapid development of the industry, agriculture, and infrastructure of the infant nations of the United States and what would become Canada. Research into early immigration and passenger lists has shown many people bearing the name Joy:

Joy Settlers in United States in the 17th Century

Joy Settlers in United States in the 18th Century

Joy Settlers in United States in the 19th Century

Joy Settlers in Canada in the 19th Century

Joy Settlers in Australia in the 19th Century

Joy Settlers in New Zealand in the 19th Century

Suggested Readings for the name Joy +