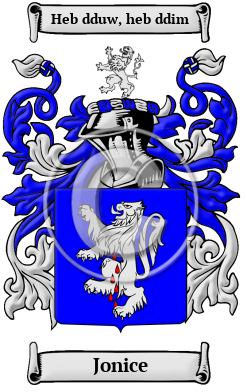 While the ancestors of the bearers of Jonice came from ancient Welsh-Celtic origins, the name itself has its roots in Christianity. This surname comes from the personal name John, which is derived from the Latin Johannes, meaning "Yahweh is gracious."

This name has always been common in Britain, rivaling William in popularity by the beginning of the 14th century. The feminine form Joan, or Johanna in Latin, was also popular, and the surname Jonice may be derived from either the male or female name. "Though its origins are in England, the surname is predominately held by people of Welsh extraction due to the overwhelming use of patronymics in Wales from the 16th century and the prevalence of the name John at that time." [1] "Next to John Smith, John Jones is probably the most common combination of names in Britain." [2]

Early Origins of the Jonice family

The surname Jonice was first found in Denbighshire (Welsh: Sir Ddinbych), a historic county in Northeast Wales created by the Laws in Wales Act 1536, where their ancient family seat was at Llanerchrugog.

The name Jones, currently one of the most prolific in the world, descends from three main sources: from Gwaithvoed, Lord Cardigan, Chief of one of the 15 noble tribes of North Wales in 921; from Bleddyn Ap Cynfyn, King of Powys; and from Dyffryn Clwyd, a Chieftain of Denbighland.

All three lines merged in Denbighshire about the 11th century and it is not known which of the three can be considered the main branch of the family. Later some of the family ventured into England. "[The parish of Astall in Oxfordshire] was formerly the residence of Sir Richard Jones, one of the judges of the court of common pleas in the reign of Charles I.; and there are still some remains of the ancient manor-house near the church, which are now converted into a farmhouse." [3]

"Llanarth Court [in Monmouthshire], the admired seat of John Jones, Esq., is a handsome and spacious mansion, the front ornamented with an elegant portico resembling that of the temple of Pæstum." [3]

Early History of the Jonice family

Compared to other ancient cultures found in the British Isles, the number of Welsh surnames are relatively few, but there are an inordinately large number of spelling variations. These spelling variations began almost as soon as surname usage became common. People could not specify how to spell their own names leaving the specific recording up to the individual scribe or priest. Those recorders would then spell the names as they heard them, causing many different variations. Later, many Welsh names were recorded in English. This transliteration process was extremely imprecise since the Brythonic Celtic language of the Welsh used many sounds the English language was not accustomed to. Finally, some variations occurred by the individual's design: a branch loyalty within a family, a religious adherence, or even patriotic affiliations were indicated by spelling variations of one's name. The Jonice name over the years has been spelled Jones, Jonas, Jone, Joness and others.

Prominent amongst the family during the late Middle Ages was Gwaithvoed Lord Cardigan, Bleddyn Ap Cynfyn, and Dyffryn Clwyd Jones, the three patriarchs of the Jonice family; John Jones of Gellilyfdy (c. 1578-c.1658), a Welsh lawyer, antiquary, calligrapher, manuscript collector and scribe; Richard Jones (1638-1712), first Earl of Ranelagh; Sir Samuel Jones (1610-1673), an English politician who sat in the House of Commons in 1656 and 1660; Colonel Philip Jones (1618-1674), a Welsh military...
Another 74 words (5 lines of text) are included under the topic Early Jonice Notables in all our PDF Extended History products and printed products wherever possible.

Migration of the Jonice family to Ireland

Some of the Jonice family moved to Ireland, but this topic is not covered in this excerpt.
Another 143 words (10 lines of text) about their life in Ireland is included in all our PDF Extended History products and printed products wherever possible.

Migration of the Jonice family

Many people from Wales joined the general migration to North America in the 19th and 20th centuries, searching for land, work, and freedom. Like the many other immigrants from the British Isles, they made a significant contribution to the development of Canada and the United States. The Welsh and their descendents added a rich cultural tradition to the newly developed towns, cities, and villages. An investigation of the immigration and passenger lists has revealed a number of people bearing the name Jonice: Alice Jones, who arrived in Boston in 1635; Charles Jones and Humphrey Jones, who both settled in Virginia in 1636; as did Anne Jones in 1648; Owen Jones, who immigrated to Maryland in 1665.