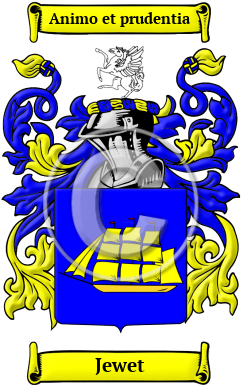 Jewet is one of the thousands of new names that the Norman Conquest of 1066 brought to England. It comes from the ancient personal name Julien. The surname of Jowett was a baptismal name which means Julien. [1]

Alternatively, the name could have been derived from the French "jouet" which means "play, sport, fun." English records we find both Jouet and Jowet." [2]

Early Origins of the Jewet family

The surname Jewet was first found in Cheshire where they held a family seat as Lords of the manor of Bredbury from early times. The lands were granted by William the Conqueror to a Norman noble by the name Jouet, from the Isle of Rhe in France. By the twelfth century they had branched to Ashton-under-Lyme in that same shire.

Early English rolls provide us a glimpse of the spelling variations used through Medieval times. Today we typically need to look beyond the spellings of these entries and concentrate on a phonetic appreciation of the names.

Early History of the Jewet family

Anglo-Norman names tend to be marked by an enormous number of spelling variations. This is largely due to the fact that Old and Middle English lacked any spelling rules when Norman French was introduced in the 11th century. The languages of the English courts at that time were French and Latin. These various languages mixed quite freely in the evolving social milieu. The final element of this mix is that medieval scribes spelled words according to their sounds rather than any definite rules, so a name was often spelled in as many different ways as the number of documents it appeared in. The name was spelled Jowett, Jowet, Jowit, Jowitt, Jewett, Jewet, Juet, Jouet, Juett and many more.

Outstanding amongst the family at this time was Nehemiah Jewett (1643-1720), an American colonial politician, Speaker of the Massachusetts House of Representatives (1693-1694) and in 1701; during his tenure, he was responsible for compensating those damaged by the Salem witch trials. Randal or Randolph Jewett (d. 1675), was an organist and composer, is said to have received the (honorary?) degree of Mus. Bac. at Trinity College, Dublin, and to have studied music under Orlando Gibbons. Jewett was organist of the cathedrals of...
Another 80 words (6 lines of text) are included under the topic Early Jewet Notables in all our PDF Extended History products and printed products wherever possible.

Migration of the Jewet family

Because of the political and religious discontent in England, families began to migrate abroad in enormous numbers. Faced with persecution and starvation at home, the open frontiers and generally less oppressive social environment of the New World seemed tantalizing indeed to many English people. The trip was difficult, and not all made it unscathed, but many of those who did get to Canada and the United States made important contributions to the young nations in which they settled. Some of the first North American settlers with Jewet name or one of its variants: Joseph and Maximilian Jewett who settled in Massachusetts in 1630; Elizabeth Jewett settled in Norfolk, Virginia in 1823; Benjamin Jewett settled in Portland Me. in 1822.