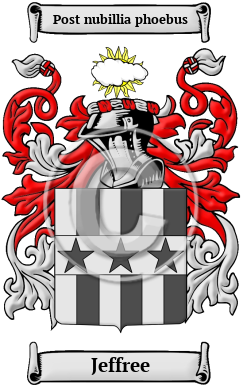 Early Origins of the Jeffree family

The surname Jeffree was first found in Aberdeen where "Jaffray was an old family name." Early feudal rolls provided the king of the time a method of cataloguing holdings for taxation, but today they provide a glimpse into the wide surname spellings in use at that time. "Symon le fiz Geffrai and Piers le fiz Geffray, burgesses of Peebles, rendered homage [to King Edward I of England] in 1296. Payment was made to David Geoffrey, Scottish merchant, for injuries and trespasses committed on him in 1474, John Joffray appears as witness, 1511, and a later John Jofra was witness in Brechin in 1552." [1]

Early History of the Jeffree family

Spelling variations of this family name include: Jaffray, Jaffrey, Jafery and others.

Notable amongst the family at this time was Alexander Jaffray (1614-1673), Director of the Chancellary of Scotland and a Quaker, son of Alexander Jaffray (d. 10 Jan. 1645), Provost of Aberdeen, by his wife Magdalen Erskine of Pittodrie, born at Aberdeen in July 1614. "Shortly after his marriage his father sent him to Edinburgh, where he stayed some time in the house of his relative Robert Burnet, father of Gilbert Burnet [q. v.] His father sent him in 1632 and 1633 to London, and in 1634 and 1635 to France. At Whitsuntide 1636 he set up housekeeping in Aberdeen, his wife...
Another 142 words (10 lines of text) are included under the topic Early Jeffree Notables in all our PDF Extended History products and printed products wherever possible.

Jeffree Settlers in New Zealand in the 19th Century