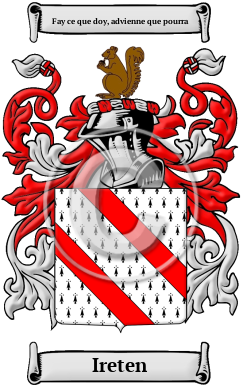 Ireten is a name of ancient Anglo-Saxon origin and comes from the family once having lived in Ireton, also known as Kirk Ireton, a parish, in the hundred of Wirksworth, in Derbyshire. In the same parish, Ireton-Wood is a township. [1] Collectively they date back to at least the Domesday Book of 1086 when they were known as Iretune [2] and literally meant "farmstead of the Irishmen." [3]

"A parish in Derbyshire, which belonged to the family temp. Richard Coeurde-Lion. Henry, brother of Sewallis, Lord of Eatington, co. Warwick, ancestor of the noble family of Shirley, had a son Fulcher de Ireton, Lord of Ireton, direct ancestor of Henry Ireton, the son-in-law of Oliver Cromwell, whose father alienated Ireton in the reign of Elizabeth." [4]

Early Origins of the Ireten family

The Hundredorum Rolls of 1273 included mention of William de Irton as holding lands in Yorkshire at that time and of Stephen de Irtone in Derbyshire. [6]

Ralph Ireton (d. 1292), was Bishop of Carlisle, and "was a member of a family that took its name from the village of Irton, near Ravenglass in Cumberland, where it held estates that remained in its possession until the eighteenth century. A pedigree in Hutchinson's 'Cumberland' makes him the son of Stephen Irton, and assigns him two brothers, Robert and Thomas. Ralph Ireton became a canon regular of the order of St. Augustine, at the priory of Gisburne in Cleveland." [7]

Early History of the Ireten family

Sound was what guided spelling in the essentially pre-literate Middle Ages, so one person's name was often recorded under several variations during a single lifetime. Also, before the advent of the printing press and the first dictionaries, the English language was not standardized. Therefore, spelling variations were common, even among the names of the most literate people. Known variations of the Ireten family name include Ireton, Ireson and others.

Notables of the family at this time include Richard Ireton, High Sheriff of Cumberland in 1531; and Nathaniel Ireson (1685-1769), an English potter, architect and mason best known for his work around Wincanton in Somerset. Henry Ireton (1611-1651), regicide, baptised 3 Nov. 1611, was the eldest son of German Ireton of Attenborough, near Nottingham. "His father, who settled at Attenborough about 1605, was the younger brother of William...
Another 66 words (5 lines of text) are included under the topic Early Ireten Notables in all our PDF Extended History products and printed products wherever possible.

Migration of the Ireten family

For political, religious, and economic reasons, thousands of English families boarded ships for Ireland, Canada, the America colonies, and many of smaller tropical colonies in the hope of finding better lives abroad. Although the passage on the cramped, dank ships caused many to arrive in the New World diseased and starving, those families that survived the trip often went on to make valuable contributions to those new societies to which they arrived. Early immigrants bearing the Ireten surname or a spelling variation of the name include: Edward and Elizabeth Ireson who settled in Boston Massachusetts in 1635; Peter Ireton, a servant sent to the "foreign plantations" from Bristol in 1658.

Motto: Fay ce que doy, advienne que pourra
Motto Translation: Do what you must, come what may.