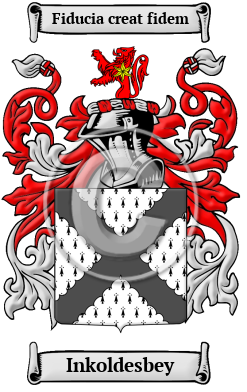 The ancestors of the bearers of the Inkoldesbey family name are thought have lived in ancient Anglo-Saxon England. They were first found in the village of Ingoldsby, Lincolnshire or from Ingleby, found in the Derbyshire, or at Ingleby-Berwick, North Yorkshire. The latter is most interesting. "At the time of the Domesday Survey, the lands here were described with those of Acklam, to which the hamlet pertained, as is implied in the term Berwick: the ancient name of the place was Berewyke-juxta-Tees." [1]

Early Origins of the Inkoldesbey family

The surname Inkoldesbey was first found in Lincolnshire at Ingoldsby, a small village in the South Kesteven district, in the union of Grantham, wapentake of Beltisloe. The village dates back to at least the Domesday Book of 1086 when it was listed as Ingoldesbi. [2]

Early History of the Inkoldesbey family

Until quite recently, the English language has lacked a definite system of spelling rules. Consequently, Anglo-Saxon surnames are characterized by a multitude of spelling variations. Changes in Anglo-Saxon names were influenced by the evolution of the English language, as it incorporated elements of French, Latin, and other languages. Although Medieval scribes and church officials recorded names as they sounded, so it is common to find one person referred to by several different spellings of his surname, even the most literate people varied the spelling of their own names. Variations of the name Inkoldesbey include Inglesby, Ingilby, Ingleby, Ingoldesby, Ingoldsby and many more.

Notables of the family at this time include Sir Richard Ingoldsby (d. 1685), English regicide, the second son of Sir Richard Ingoldsby of Lenthenborough, Buckinghamshire, by Elizabeth, daughter of Sir Oliver Cromwell of Hinchinbrook, Huntingdonshire. [5] His younger brother, Sir Henry Ingoldsby, 1st Baronet (1622-1701), was an English military commander and landowner who commanded a regiment in Ireland under Cromwell and Ireton, represented the counties of Kerry, Limerick, and Clare in the parliaments of 1654, 1656, and 1659, and had the singular fortune to be created a Baronet both by the Protector (31 March 1658) and by Charles II (30 Aug. 1660)...
Another 164 words (12 lines of text) are included under the topic Early Inkoldesbey Notables in all our PDF Extended History products and printed products wherever possible.

Migration of the Inkoldesbey family to Ireland

Some of the Inkoldesbey family moved to Ireland, but this topic is not covered in this excerpt.
Another 106 words (8 lines of text) about their life in Ireland is included in all our PDF Extended History products and printed products wherever possible.

Migration of the Inkoldesbey family

Searching for a better life, many English families migrated to British colonies. Unfortunately, the majority of them traveled under extremely harsh conditions: overcrowding on the ships caused the majority of the immigrants to arrive diseased, famished, and destitute from the long journey across the ocean. For those families that arrived safely, modest prosperity was attainable, and many went on to make invaluable contributions to the development of the cultures of the new colonies. Research into the origins of individual families in North America revealed records of the immigration of a number of people bearing the name Inkoldesbey or a variant listed above: John Ingoldsby, who arrived in Boston in 1642; Henry Ingoldsby, who came to Pennsylvania in 1682; Mary Inglesby, a bonded passenger who arrived in Virginia in 1741.