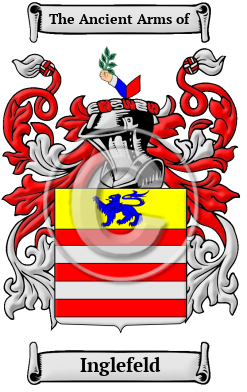 The name Inglefeld is of Anglo-Saxon origin and came from when the family lived in Englefield, a parish in Berkshire, six miles from Reading. "This parish derives its name from the Saxon word Ingle, a fire or beacon light; and probably had its origin about the middle of the ninth century, when the Danes, having made themselves masters of Reading, sent out a detachment from their army to attack the Saxons, who were encamped here, and who drove them back with great loss. " [1]

Early Origins of the Inglefeld family

The surname Inglefeld was first found in Berkshire, at Englefield, a village and civil parish, best known as the site of The Battle of Englefield on 31 December 870 between the Anglo-Saxons, under Æthelwulf, Ealdorman of Berkshire, and the Danes, which resulted in a resounding victory for the Saxons. Englefield House has been the ancestral home of the Englefield family, since the time of King Edgar, Edgar the Peaceful (943-975.)

"The family continued in possession of the estate when Lambarde wrote, temp. Queen Elizabeth. 'It is at this day part of the possessions of a man of that name, whear-by it may appeare that the place som tyme gyveth name to the parson' (person). The Englefields are said to have been proprietors of the lands in the time of Egbert, some years before he became king of all England." [2]

Early feudal rolls provided the king of the time a method of cataloguing holdings for taxation, but today they provide a glimpse into the wide surname spellings in use at that time. William de Englefield was found in the Pipe Rolls for Staffordshire in 1185, Philip de Ingelfeld in Gloucestershire in 1355, and Stephen Ingylfeld was found in registered in 1407. [3]

Early History of the Inglefeld family

It is only in the last few hundred years that the English language has been standardized. For that reason, early Anglo-Saxon surnames like Inglefeld are characterized by many spelling variations. As the English language changed and incorporated elements of other European languages, even literate people changed the spelling of their names. Scribes and monks in the Middle Ages spelled names they sounded, so it is common to find several variations that refer to a single person. The variations of the name Inglefeld include: Englefield, Englefeld, Englesfield and others.

Notables of the family at this time include Sir Thomas Englefield (Inglefield) (ca. 1455-1514), probably from Englefield, Berkshire, Speaker of the House of Commons; his son, Sir Francis Englefield (c.1522-1596), an English courtier and Roman Catholic exile; Sir Francis Englefield, 1st...
Another 40 words (3 lines of text) are included under the topic Early Inglefeld Notables in all our PDF Extended History products and printed products wherever possible.

Migration of the Inglefeld family

Many English families tired of political and religious strife left Britain for the new colonies in North America. Although the trip itself offered no relief - conditions on the ships were extremely cramped, and many travelers arrived diseased, starving, and destitute - these immigrants believed the opportunities that awaited them were worth the risks. Once in the colonies, many of the families did indeed prosper and, in turn, made significant contributions to the culture and economies of the growing colonies. An inquiry into the early roots of North American families has revealed a number of immigrants bearing the name Inglefeld or a variant listed above: Charles Englefield who arrived in New York State in 1832.