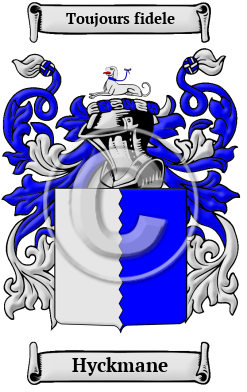 The generations and branches of the Hyckmane family share a name that has its roots in the ancient Anglo-Saxon culture of Britain. The name Hyckmane comes from the baptismal name for the son of Hickman. As the naming tradition grew in Europe baptismal names began to be introduced in many countries. Baptismal names were sometimes given in honour of Christian saints and other biblical figures. There are very few Christian countries in Europe that did not adopt surnames from these religious figures.

Early Origins of the Hyckmane family

The surname Hyckmane was first found in Lincolnshire, where the Hickman family of Gainsborough trace back to Robert Fitz-Hickman, lord of the manors of Bloxham and Wickham. [1]

Early History of the Hyckmane family

Until quite recently, the English language has lacked a definite system of spelling rules. Consequently, Anglo-Saxon surnames are characterized by a multitude of spelling variations. Changes in Anglo-Saxon names were influenced by the evolution of the English language, as it incorporated elements of French, Latin, and other languages. Although Medieval scribes and church officials recorded names as they sounded, so it is common to find one person referred to by several different spellings of his surname, even the most literate people varied the spelling of their own names. Variations of the name Hyckmane include Hickman, Hykeman, Hyckman and others.

Migration of the Hyckmane family to Ireland

Some of the Hyckmane family moved to Ireland, but this topic is not covered in this excerpt. More information about their life in Ireland is included in all our PDF Extended History products and printed products wherever possible.

Migration of the Hyckmane family