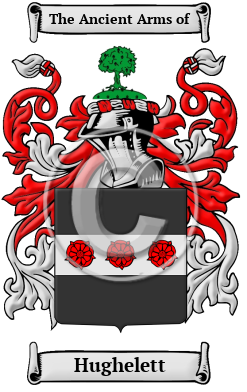 The vast movement of people that followed the Norman Conquest of England in 1066 brought the Hughelett family name to the British Isles. Hughelett comes from the Old English given name Huwelet, Huwelot, or Hughelot. Nonetheless, the name is also a diminutive of the Old French personal name Hugh, or Hughe, which was introduced to England after the Norman Conquest of 1066. The personal name Hugh is a short form of various Germanic compound names formed from the element hug, which meant heart, mind, and spirit. [1]

Early Origins of the Hughelett family

The surname Hughelett was first found in Norfolk where Agnes Hughelot was recorded c. 1248. A few years later, Thomas Huwelot was listed in Huntingdonshire c. 1250 and later again, Richard Hulot was recorded in Suffolk in 1275. Walter Howlot, Hughlot was found in Devon in 1310 and 1311 and John Huelot was found in the Subsidy Rolls of Worcester in 1327. In Yorkshire, John Highlot was listed there in 1357 and Robert Hulat was found in the Subsidy Rolls of Suffolk in 1381. [2]

Early History of the Hughelett family

Endless spelling variations are a prevailing characteristic of Norman surnames. Old and Middle English lacked any definite spelling rules, and the introduction of Norman French added an unfamiliar ingredient to the English linguistic stew. French and Latin, the languages of the court, also influenced spellings. Finally, Medieval scribes generally spelled words according to how they sounded, so one person was often referred to by different spellings in different documents. The name has been spelled Hewlett, Hewlet, Hewlit, Hewlitt, Hughelot, Hughelett and many more.

Outstanding amongst the family at this time was Captain William Hewlett, the officer in charge of the soldiers at the execution of Charles I. He was later convicted on 15 October 1660 for his part in the regicide but was not executed. Ebenezer Hewlett (fl. 1747), was an antitrinitarian writer who lived at the New Pales in Sun Street, without Bishopsgate, London, and was for a time employed by the East India Company. [5] Lady Sarah Hewley (1627-1710), was the English foundress of the Hewley trust, the only daughter and heiress of Robert Wolrych (d. 11 Dec. 1661), bencher...
Another 97 words (7 lines of text) are included under the topic Early Hughelett Notables in all our PDF Extended History products and printed products wherever possible.

Migration of the Hughelett family to Ireland

Some of the Hughelett family moved to Ireland, but this topic is not covered in this excerpt. More information about their life in Ireland is included in all our PDF Extended History products and printed products wherever possible.

Migration of the Hughelett family

To escape the political and religious persecution within England at the time, many English families left for the various British colonies abroad. The voyage was extremely difficult, though, and the cramped, dank ships caused many to arrive in the New World diseased and starving. But for those who made it, the trip was most often worth it. Many of the families who arrived went on to make valuable contributions to the emerging nations of Canada and the United States. An inquiry into the early roots of North American families reveals a number of immigrants bearing the name Hughelett or a variant listed above: Mathew Hewlett, who settled in Boston in 1634; Elizabeth and John Hewlett settled in Maryland in 1774; Archibald Hewlet arrived in Philadelphia in 1858..