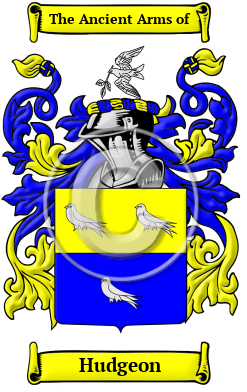 The origins of the name Hudgeon are from the ancient Anglo-Saxon culture of Britain. It is derived from the personal name Roger. The surname is based upon the pet form Hodge. The name Roger is of Old Norman origin and came to England shortly after the Norman Conquest of 1066. Many names came to England in this way, as King William the Conqueror encouraged the immigration of skilled tradesmen into his newly conquered country. The name Roger can be loosely translated as "fame-spear." Names based upon military prowess were quite popular in the early medieval period.

Early Origins of the Hudgeon family

The surname Hudgeon was first found in Northumberland where they held a family seat from very ancient times, some say well before the Norman Conquest and the arrival of Duke William at Hastings in 1066 A.D.

Early History of the Hudgeon family

This web page shows only a small excerpt of our Hudgeon research. Another 85 words (6 lines of text) covering the years 1798 and 1866 are included under the topic Early Hudgeon History in all our PDF Extended History products and printed products wherever possible.

Sound was what guided spelling in the essentially pre-literate Middle Ages, so one person's name was often recorded under several variations during a single lifetime. Also, before the advent of the printing press and the first dictionaries, the English language was not standardized. Therefore, spelling variations were common, even among the names of the most literate people. Known variations of the Hudgeon family name include Hodgins, Hodgens, Hodgin, Hodgings and others.

More information is included under the topic Early Hudgeon Notables in all our PDF Extended History products and printed products wherever possible.

Migration of the Hudgeon family to Ireland

Some of the Hudgeon family moved to Ireland, but this topic is not covered in this excerpt.
Another 68 words (5 lines of text) about their life in Ireland is included in all our PDF Extended History products and printed products wherever possible.

Hudgeon Settlers in Australia in the 19th Century