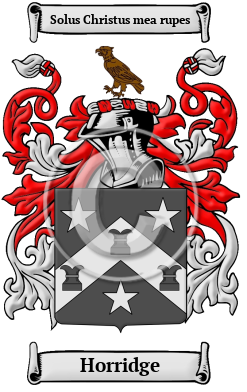 The Horridge surname is a habitational taken on from the place name Orrock in Fife.

Early Origins of the Horridge family

The surname Horridge was first found in Fife, where they held a family seat in the lands of Orrock some say well before the 12th century. Simon Orrock is recorded as holding those lands in the year 1248. Simon, with his brother Freskinus and son Robert agreed to give the convent of Dunfermline the lands of Muyoch and Knokduy, part of the Clan lands of Orrock. [1]

To the south in England, we find Horridge is the prevailing variant in use. In this case, the name could have originated in either Hawridge, Buckinghamshire, Horwich in Lancashire or from "one of the five places in Devon named Horridge." [2]

Early rolls include: Richard de Hawerugge in Cornwall in 1297; and Thomas de Horewich in the Subsidy Rolls for Derbyshire in 1327. [2]

The Wills at Chester include: James Horridge, of Over Darwen, 1608; and James Horwich, of Over Darwen, 1632. Presumably these are entries for father and son. The Register of the University of Oxford includes Anthony Horridge, 1613. The Exchequer Depositions, Lancashire list 'Messuage in Horrage, alias Horwich, lately in the possession of Thomas Urmstone,' 1675. [3]

Early History of the Horridge family

This web page shows only a small excerpt of our Horridge research. Another 145 words (10 lines of text) covering the years 1296, 1316, 1513, 1672, 1690 and 1750 are included under the topic Early Horridge History in all our PDF Extended History products and printed products wherever possible.

Spelling variations of this family name include: Horrock, Horrocks, Orrock, Orrocks, Orrox, Horrox and others.

More information is included under the topic Early Horridge Notables in all our PDF Extended History products and printed products wherever possible.

Horridge migration to the United States +

Horridge Settlers in United States in the 19th Century

Horridge Settlers in United States in the 20th Century