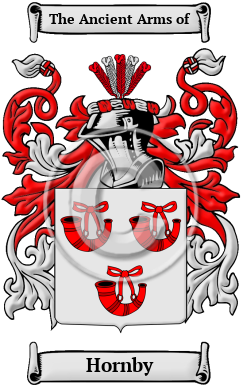 The roots of the Anglo-Saxon name Hornby come from when the family resided in one of the places called Hornby in Lancashire, Westmorland (now part of Cumbria), or the North Riding of Yorkshire. "This place is distinguished for its castle, which stands on the site of a Roman villa, on the summit of a bold rock of conical form, in many parts shrouded by trees, and washed by the Wenning at its base. The castle was originally founded soon after the Norman Conquest." [1]

Early Origins of the Hornby family

The surname Hornby was first found in Lancashire at Hornby, a township and chapelry, and formerly a market-town, in the parish of Melling, hundred of Lonsdale. There are two Hornby Castles of note: the first in Lancashire which was originally built for the Neville family in the 13th century, and the second in Yorkshire, home to the St. Quintin family.

Early History of the Hornby family

The English language only became standardized in the last few centuries; therefore,spelling variations are common among early Anglo-Saxon names. As the form of the English language changed, even the spelling of literate people's names evolved. Hornby has been recorded under many different variations, including Hornby, Hornbie and others.

Notables of the family at this time include Henry Horneby (d. 1518), Master of Peterhouse, was perhaps a native of Lincolnshire. He became a member of Clare Hall, and was afterwards elected to a fellowship at Michaelhouse. [4] William Hornby (fl. 1618), was English poet and was, "according to his own account, educated at Peterborough...
Another 54 words (4 lines of text) are included under the topic Early Hornby Notables in all our PDF Extended History products and printed products wherever possible.

Hornby migration to the United States +

For many English families, the political and religious disarray that shrouded England made the far away New World an attractive prospect. On cramped disease-ridden ships, thousands migrated to those British colonies that would eventually become Canada and the United States. Those hardy settlers that survived the journey often went on to make important contributions to the emerging nations in which they landed. Analysis of immigration records indicates that some of the first North American immigrants bore the name Hornby or a variant listed above:

Hornby Settlers in United States in the 18th Century

Hornby Settlers in United States in the 19th Century

Hornby Settlers in Australia in the 19th Century

Hornby Settlers in New Zealand in the 19th Century

Historic Events for the Hornby family +