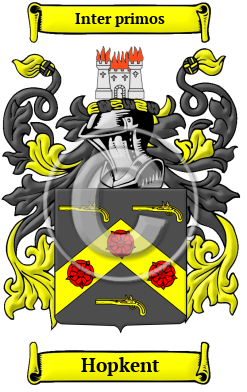 The name Hopkent originated with the Anglo-Saxon tribes that once ruled Britain. It is derived from the name Hobb, a pet form of the personal name Robert. This name was supplemented by the common diminutive suffix -kin. Thus, the original form of the surname Hopkent was Hobbe-kin. [1]

Early Origins of the Hopkent family

The surname Hop Kent was first found in Oxfordshire at Swalcliffe where a family of this name has resided since the 13th century and had nineteen proprietors who had the personal name of John. [1]

Early History of the Hopkent family

One relatively recent invention that did much to standardize English spelling was the printing press. However, before its invention even the most literate people recorded their names according to sound rather than spelling. The spelling variations under which the name Hopkent has appeared include Hopkins, Habbagan, Hopkin, Hopkines, Hopkyns and many more.

Notables of this surname at this time include: John Hopkins (d. 1570), part-translator, with Thomas Sternhold and others, of the famous metrical version of the Psalms, was admitted B.A. at Oxford in 1544. [4] Richard Hopkins (d. 1594?), was a Catholic exile, born of 'genteel parents,' and at about seventeen years of age became a commoner of St. Alban's Hall, Oxford, where he was residing in 1563. [4] Edward Hopkins (1600-1657), was an English colonist, politician, and Governor of the Connecticut Colony, founder of the New Haven and Connecticut colonies, politically active in the administration of Oliver Cromwell. Stephen Hopkins (c. 1581-1644), was a...
Another 134 words (10 lines of text) are included under the topic Early Hopkent Notables in all our PDF Extended History products and printed products wherever possible.

Migration of the Hopkent family to Ireland

Some of the Hopkent family moved to Ireland, but this topic is not covered in this excerpt.
Another 182 words (13 lines of text) about their life in Ireland is included in all our PDF Extended History products and printed products wherever possible.

Migration of the Hop Kent family

At this time, the shores of the New World beckoned many English families that felt that the social climate in England was oppressive and lacked opportunity for change. Thousands left England at great expense in ships that were overcrowded and full of disease. A great portion of these settlers never survived the journey and even a greater number arrived sick, starving, and without a penny. The survivors, however, were often greeted with greater opportunity than they could have experienced back home. These English settlers made significant contributions to those colonies that would eventually become the United States and Canada. An examination of early immigration records and passenger ship lists revealed that people bearing the name Hopkent arrived in North America very early: Michael Hopkin settled in Barbados in 1654; Stephen Hopkins and his wife, Elizabeth, settled in Plymouth, Massachusetts in the year of the "Mayflower&quot.