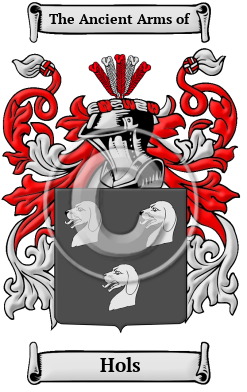 The first bearers of the distinguished surname Hols came to England in the great wave of migration that followed the Norman Conquest of 1066. The name is occupational in origin, stemming from the primary activity of the bearer. It is derived from the Old French term "halle," which referred to a large manor house, which indicates that the original bearer of the name worked at the manor of the local Lord in some role such as a servant or chamberlain. [1] [2] [3]

Many of the Norman noblemen who came to England with William the Conqueror soon grew dissatisfied with William's rule; as such, members of the Hols family accepted land grants from King Malcolm Canmore of Scotland, and became prominent in that country.

Early Origins of the Hols family

The younger son of this noble house, Arthur FitzWilliam, came to be known as "Hall" so as to distinguish him from his senior brother. Hence, Arthur Hall was the first known bearer of the name, appearing on record about the year 1090. [4]

In Scotland, the name in Latin was de Aula and accordingly, the first record here was "Waldeu de Aula who witnessed a charter by Walter de Veteri Ponte a. 1200." [5]

Over one hundred years later the English version of the name was in use as "John of the Hall was one of an inquest made at Berwick, 1302 and c. 1311 Thomas dictus del Halle witnessed resignation by Adam de Dowane of his land of Grenryg in the barony of Lesmahagow." [5]

During this period, Latin and English for records was in use as about the same time as the last entries, we found "in 1325 mention is made of Thomas dictus de Aula, and Andreas de Aula held land in Aynstrother c. 1330. The first Hall of Fulbar in Renfrewshire was Thomas de Aula, surgeon, who for his faithful service obtained from Robert II a grant of land in the tenement of Staneley, barony of Renffrow, 1370." [5]

Early History of the Hols family

Notable among the family at this time was John Hall, known as "Mad Jack Hall" and "Crazy Jack Hall" (1672-1716), a Scottish Jacobite leader, property owner and a Justice of Peace in Northumberland, a major figure during the First Scottish Uprising in the Jacobite Rebellion of 1715, he was beheaded for high treason on 13 July 1716; and Lyman Hall of Georgia, one of the signers of the American Declaration of Independence on 4 July 1776. In England, Joseph Hall (1574-1656), was an English bishop, satirist and moralist; George Hall (c.1613-1668), an English Bishop...
Another 93 words (7 lines of text) are included under the topic Early Hols Notables in all our PDF Extended History products and printed products wherever possible.

Migration of the Hols family to Ireland

Some of the Hols family moved to Ireland, but this topic is not covered in this excerpt.
Another 77 words (6 lines of text) about their life in Ireland is included in all our PDF Extended History products and printed products wherever possible.

Hols migration to the United States +

Hols Settlers in United States in the 18th Century