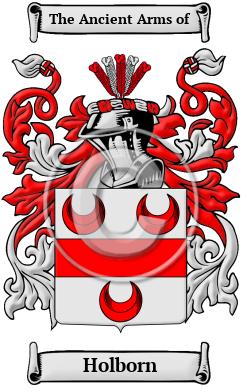 Early Origins of the Holborn family

The surname Holborn was first found in Greater London at Holborn. [1] [2] This place dates back to the Domesday Book of 1086 where it was listed as Holeburne. [3]

Early History of the Holborn family

This web page shows only a small excerpt of our Holborn research. Another 72 words (5 lines of text) covering the years 1644, 1597, 1647, 1615 and 1643 are included under the topic Early Holborn History in all our PDF Extended History products and printed products wherever possible.

It is only in the last few hundred years that the English language has been standardized. For that reason, Anglo-Norman surnames like Holborn are characterized by many spelling variations. Scribes and monks in the Middle Ages spelled names they sounded, so it is common to find several variations that refer to a single person. As the English language changed and incorporated elements of other European languages such as Norman French and Latin, even literate people regularly changed the spelling of their names. The variations of the name Holborn include Holborn, Holbourne, Holborne, Hoborn, Hobourne, Hoborne, Holburne and many more.

Outstanding amongst the family at this time was Anthony Holborne (fl. 1597), was an English musical composer, possibly a member of Queen Elizabeth's Chapel Royal. He published two volumes which in total had 97 pieces. [7] Sir Robert Holborne (d. 1647), was an English lawyer, the son of Nicholas Holborne of Chichester. "He was trained for the law, as the custom then was, at Furnival's Inn...
Another 65 words (5 lines of text) are included under the topic Early Holborn Notables in all our PDF Extended History products and printed products wherever possible.

Holborn Settlers in New Zealand in the 19th Century