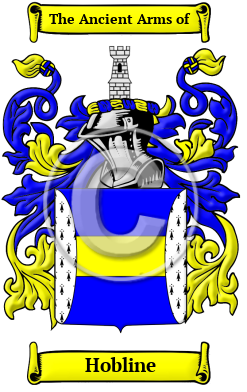 The distinguished surname Hobline emerged among the industrious people of Flanders, which was an important trading partner and political ally of Britain during the Middle Ages. As a result of the frequent commercial intercourse between the Flemish and English nations, many Flemish migrants settled in Britain. In early times, people were known by only a single name. However, as the population grew and people traveled further afield, it became increasingly necessary to assume an additional name to differentiate between bearers of the same personal name. One of the most common classes of surname is the patronymic surname, which was usually derived from the first name of the person's father. Flemish surnames of this type are often characterized by the diminutive suffix -kin, which became very frequent in England during the 14th century. The surname Hobline is derived from Hobb, a pet form of the personal name Robert. The surname Hobline features a double diminutive formed from the suffixes -el and -in. [1]

Early Origins of the Hobline family

The surname Hobline was first found in Cornwall where they were found principally in Nanswhydden. The Hoblyns of Nanswhydden bought from the Blewett family part of an original estate in the barton of Colon or Cloan. The other moiety passed from Trefusis to the Earl of Radnor as early as the year 1620. This was afterwards purchased of the representatives of the last earl by the Hoblyns, and the whole is now the property of the Reverend Robert Hoblyn. [4]

Early History of the Hobline family

Prominent in the family at this time was John Hoblyn (ca.1660-1706), an English lawyer and Member of Parliament for Bodmin (1695-1706.) Sir John Houblon (1632-1712), was the first Governor of the Bank of England from 1694 to 1697. He was "born in London and was the third son of James Houblon, by his wife Marie Ducane. His father an eminent merchant and the elder...
Another 62 words (4 lines of text) are included under the topic Early Hobline Notables in all our PDF Extended History products and printed products wherever possible.

Migration of the Hobline family

An examination into the immigration and passenger lists has discovered a number of people bearing the name Hobline: Christopher Hoblyn who settled in Barbados in 1685; Peter Hobling settled in Philadelphia in 1753.